Retire? But what will you DO all day?

A few days ago Millionaires Unveiled released a podcast I recorded with them. When I was talking with the hosts, part of the conversation was to do about my goal of retiring earlier than the norm. One of my friends IRL asked me the question in the title – which gave me the idea for this post. I can understand where she was coming from; work takes up huge chunks of everyone’s days.  So I grabbed my phone and walked around, snapping pics of things that I think will make the time in retirement slip by very peacefully.

See the maple tree in the middle of this photo? One of the things I want to do is to make a garden on my front verandah. I’m in no hurry – I visualise terracotta and deep blue pots with a mix of ornamental, edible and flowers that I’ll gradually accumulate. Last week my sister asked me to go to a market with her. I saw a red maple for the backyard and bought it, then went back the next week to pick up this green one. When I look at it through the lounge room windows as I’m sitting here on the couch, it looks lush and green and relaxing. This will be a project that will take me years to complete, probably, and every season I’ll be swapping out flowers for different colours and looks. It’ll make me happy every time I arrive home.

Also, do you see the 3 tiny succulents in the pot on the right-hand side? Remember them – they’ll be coming back later. That right-hand pot holds my bay tree. I bought it 15 years ago when it was a tiny sprig, planted it in the pot and it’s been giving me fresh bay leaves for cooking ever since. That was a little project that’s worked pretty darned well. 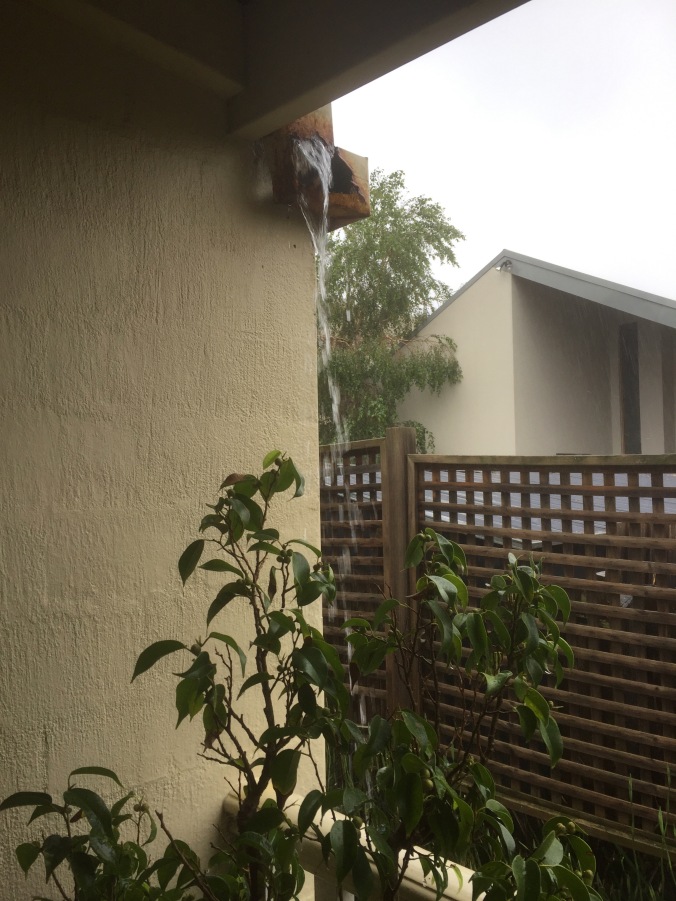 Not all projects are lush, green, tree-hugging ones. I was at home on Melbourne Cup Day, when I discovered that I have a water feature in my front yard. Look at the size of the hole in the guttering! I’m so unobservant – I had no idea. Part of the joys of being a homeowner is that you have to run around and do the boring jobs that need doing around the place, as well as the fun ones.

At the moment I feel like I’m never home. My commute is nearly an hour each way and I work full-time. But when I retire, I’ll have time to tick off all the things I want to get down around the house. I’m really looking forward to having The Best House In Melbourne be totally tailored to how I want to live. There are advantages to being single…

So many things in this photo!! Anyone who creates something will never be bored. I finished this scarf for Izzy, David25’s girlfriend. They’ve been going out for 18 months and they still seem very fond of each other, so I thought it must be time to invest in a hand-made item for her birthday. It took about a month to knit.

See the china cabinet in the background? It’s full of family curios and, more importantly, things I’ve brought back from my travels. There’s the Babushka dolls from Lincoln, the twig from the actual apple tree that Isaac Newton was sitting under when he worked out what gravity was, the wooden acorn that was carved from an oak tree that Jane Asten herself planted, the Delft owl sheltering her babies under her wings that I bought over the canal from the Anne Frank house and so many more.

Above the china cabinet are the Staffordshire dogs from England that my dear friend Scott organised for me, a hand-drawn copy of an ancient North Korean painting that I bought in the art gallery in the centre of Pyongyang, a chest from Singapore and, just out of frame, a print of ‘The Cavalier’s Friends’ – which every breeder of Cavalier King Charles Spaniels has somewhere in their home.

I fully intend to keep travelling all over the place. I’ll always have dogs. The things in the china cabinet and elsewhere around the house will be added to as time goes on. Old Lady Frogdancer will be surrounded by beautiful and quirky things from all over the world. She’s going to have the BEST decor!

I just finished reading this book. It’s a good one. There’s a pink speaker that I picked up in Beijing that I take around with me that I listen to podcasts with. My laptop is here. There’s a wealth of entertainment and information right there – most of it free. As long as there are libraries, bookshops and the internet in the world – I’ll never have time dragging on my hands.

Another set of projects. The pebbles on the ground will soon be replaced by brick paving, which means no more weeds. The bougainvilia is waiting to be planted outside my kitchen window. Every time I put the kettle on or walk to the sink to start cooking I’ll see a mass of flowers. Every year it’ll get bigger and bigger. I know that it’ll make me smile.

There’s also a more practical project, with the worm farm just behind it. I’m collecting ‘worm wee’ to put on my plants. Free fertiliser!

Here’s another project that Future Frogdancer will be so glad I’ve started. An asparagus patch. This is the first year they’ve come up, so I can’t touch them. Next year, I might take a spear or two, but basically, you’re meant to leave them alone to grow and develop. The third year – open slather!!! For the next 20 years or so.

I’m a big believer in having things to look forward to.

Remember those tiny succulents? They’ll end up here, next to my project to see if the lavender bushes will bring bees to fertilise my apple trees. I decided I wanted the steps up to the veggie patch to be lined with terracotta pots. I’m in no hurry to fill them. Some will be permanent plantings, others will be seasonal flowers. Every few months there’ll be a different look I’ll be POTtering around with.

There’s always conundrums to solve, as well, and that’ll never change. When I redesigned the backyard, I had soil brought in for the veggie beds. Turns out that it’s pretty ordinary and my seedlings are all turning yellow. Here is a row of tromboncino zucchinis that I planted in a bed that I’d previously dug in coffee grounds and crushed up eggshells. See how they get worse as they go along?

I hadn’t quite reached the end of the bed with the coffee grounds. Now I know that adding them is clearly something that the plants love, which probably means that I’ll have to swap from Shiraz to coffee to keep the supply up! Sleep is for the weak, anyway…

Improving the soil will take time. Hopefully, by the time I pull the pin from work, I’ll have made the veggie garden a fertile oasis that Old Lady Frogdancer can make the most of.

Another project that will keep me busy. One day this will also have brick paving, a new fence and (maybe) a collection of fuschias. They don’t like the sun, so being on the south side of the house they’ll enjoy the shade. Or maybe it’ll be something else. So many options! (When I retire), so much time! 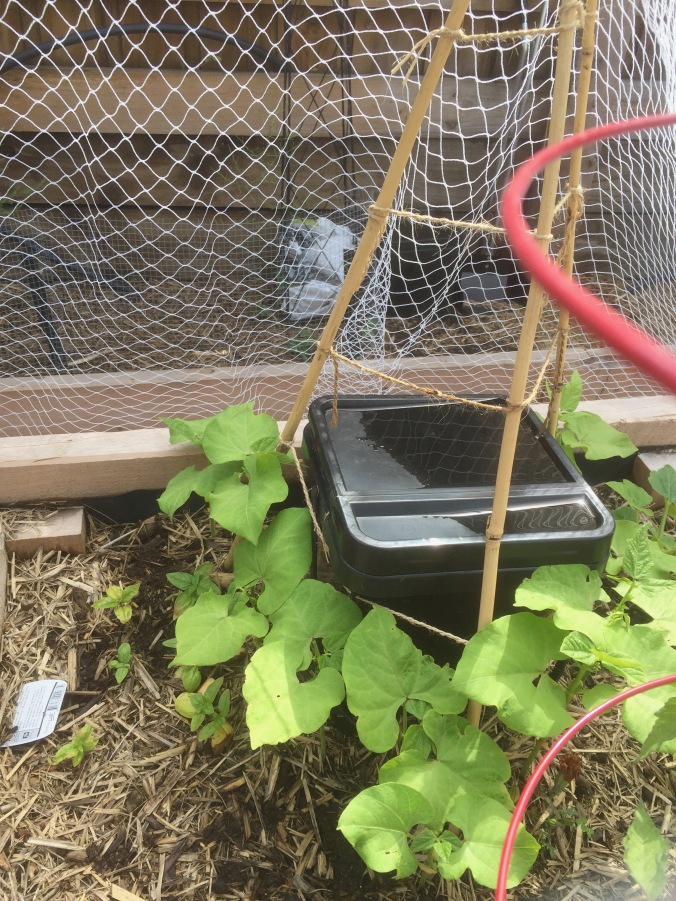 Another experiment! There’s always something to do to keep your mind busy.

As part of the “Improve The Soil” push, I bought 6 tiny worm farms to sit on the surface of the garden beds. They have holes in the bottom, the theory being that the worms move into the farm to eat, then move out to move their way around the soil and gradually improve it. Trouble is, these farms are meant to be put in the shade. What I’ve decided to do is to plant bean seeds around the outside of them, so that when the summer temperatures reach 40C or more, the plants should shade the worm farms and protect any worms stupid enough to still be inside the farms from being boiled alive.

So far, so good. The Lazy Housewife beans are growing and the worms appear to be going ok. After Christmas is when we’ll see the hot weather and by then the bean plants should be covering the outside. We’ll see if it’s a brilliant idea or a bit of a fizzer. 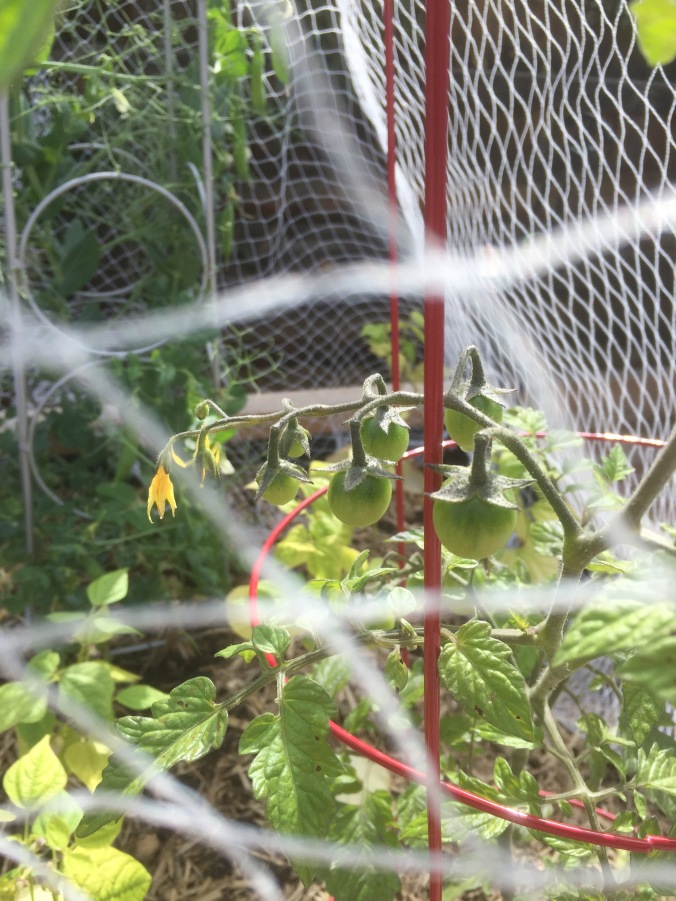 Tomatoes on the Rapunzel cherry tomato plant. David25 gave it to me as part of my birthday present. Gifts like this will continue for as long as Old Lady Frogdancer can continue to totter up to the garden beds. 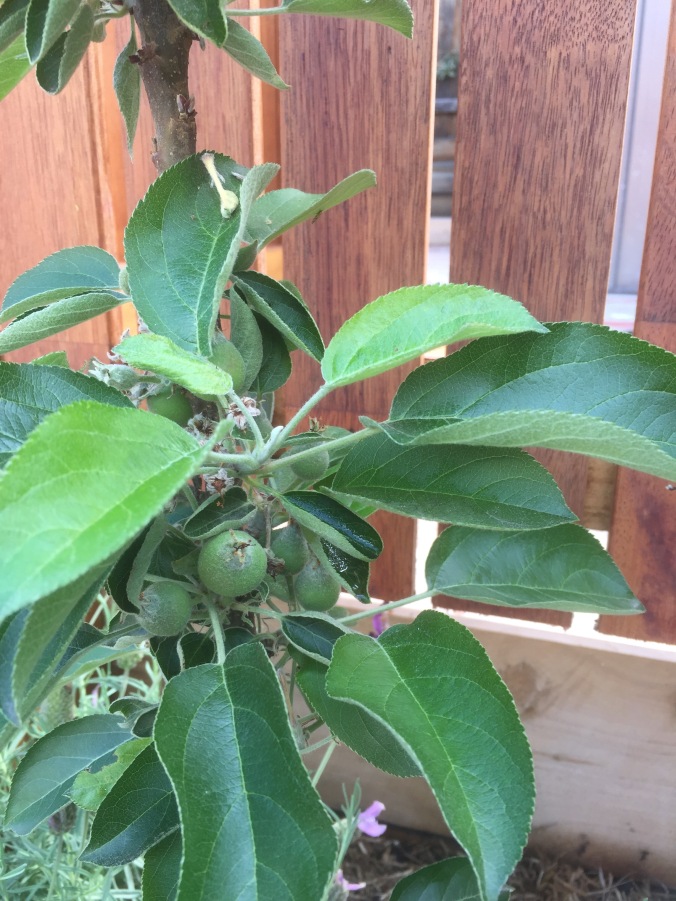 Sometimes projects and experiments don’t work. But sometimes they do. Apples! The lavender bushes bring all the bees to my yard.

Sometimes, like my friend, I wonder if retiring early will mean days filled with tedium. But with all these little things at my fingertips, along with the theatre, art galleries, travel, friends and family… I think my days will slip by very contentedly.

Frugal Friday, The 'why' of FI.