8 gift ideas when you’re buying for a frugal person.

Ok, I admit it. I’m a frugal person. I hate to waste money on fripperies, and I hate seeing my loved ones do the same. But that doesn’t mean that I don’t like Christmas presents!!

Christmas is my favourite time of the year. When my marriage broke up, back in the day, I split the holidays with my ex-husband. He had Easter (his family gives WAY more chocolate than mine does) and I had Christmas. I love the plotting and planning, the hiding away to wrap presents, the sneaky questions aimed at ferreting out just what someone would like to be given – I love it all.

But here’s the thing – we all want to minimise the presents that miss the mark with the recipient and we want to increase our chances of seeing a genuine smile on the face of someone you love when they see the present you bought them. Here are some gift ideas for that frugal someone in your life.

1. Buy things they’ll use every day.

My third son, Ryan23, is a student. He doesn’t have much money to spend, so when I was inconsiderate enough to have a birthday recently, he had to come up with the goods. Instead of buying something splashy and expensive, he came up with some brilliant little gifts. The first one is the soap that you see above. His friend has a small side-hustle making and selling soap. He remembered the days when I used to make our own soap, plus he knows me well. I shower every day. He bought two ‘cakes’ of soap for me.

I loved this gift! In fact, I loved it so much that I raced out and made some more soap of my own. It satisfies so many things – each morning I pick it up and smile because it makes me think of my son. It’s hand-crafted soap, which is so much better for the skin, so I feel pampered. It will get used up, instead of becoming clutter. 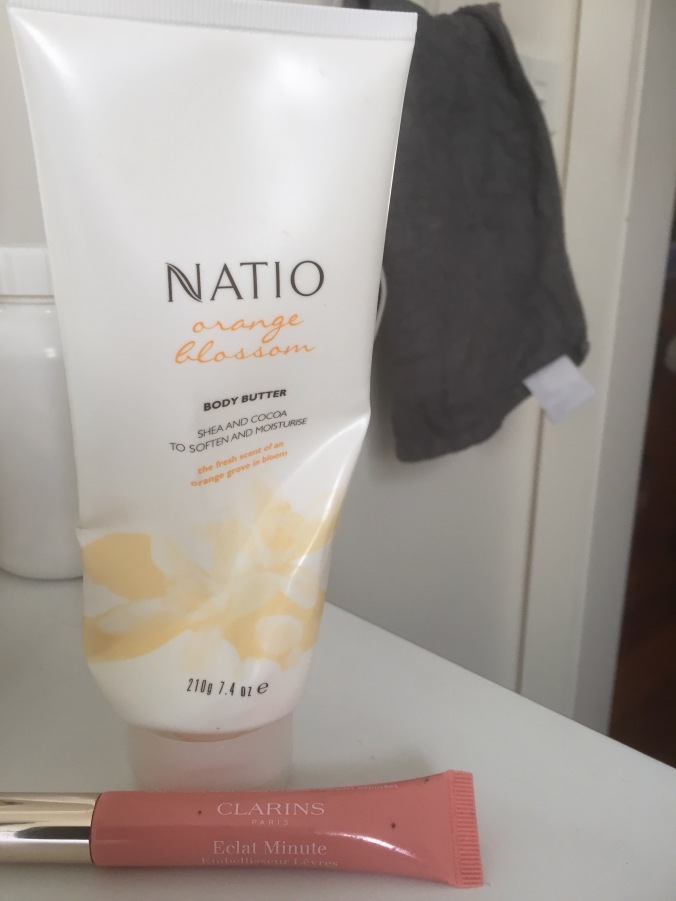 2. Buy little luxuries that they’ll use that they wouldn’t buy for themselves.

My second son, David25, loves to think of gifts to spoil people. For my birthday, he hopped online and looked for “most popular lip gloss”. He also gave me a black evening bag, because I’ve bought season tickets to the Melbourne Theatre Company and he also gave me a luxurious cocoa butter body creme.

I don’t really use body lotion, but hey! Skin is skin, right? I looked at the ingredients and thought that they sounded like night moisturiser. So I started using it, thinking that if my skin flared up I’d go back to my usual moisturiser. Two months later the tube is nearly used up, my skin looks youthful and dewy and neither David25’s money or mine has been wasted. Again, it won’t cause clutter around the place and I get to use products that I would never have bought for myself. It’s special.

This is an area where you should probably enlist the recipient’s help, but it could be worth it. Nothing would be better than someone saying, “I know you like knitting/board games/quilting/woodwork… what could I buy you that you’d love to work with?”

Trust me – there’s always something that a frugal hobbyist has eyed off and said to themselves, “That looks so nice, but I’d better not buy it.” It could be a gorgeous little pair of scissors for snipping threads – a frugal person will look at it, love it but then say, “But I already have a serviceable pair of scissors for that. I don’t actually NEED them.”

It might be something that they can actually get their hands on, such as a skein of yarn hand-dyed in Peru that is as soft as butter and costs more than your beloved frugalist thinks they should pay for themselves. But as a gift? They’ll think of you and treasure each moment they knit and then wear the item.

If they don’t want to say anything, because they’re worried about you spending too much on them, that’s when vouchers become your friends. Again – use their frugality as a weapon to get them to treat themselves. They may not dream of spending $50 in one hit at the craft store, but when the money has already been spent? They’ll march into that store and make sure not to waste a single penny of YOUR money.

4. Go in partnership with a frugal craft person.

I just thought of this one, but it’d be THE BEST. I’m always knitting or quilting something for the boys. Years ago, back when Tom26 was Tom16, I said to him that I was going to make him a quilt. He insisted on going to Spotlight with me to choose the fabrics. It was the best afternoon! We wandered around, with him choosing the prints that he liked – golf, guitars, The Beatles, and others that I can’t remember. We had such a great time, then he took a keen interest in the design and hung over me when I had sewing days while I was putting it together.

Ten years later, it’s still on his bed. He loves it.

Why not ask the frugal craftist in your life to make something for you, then go shopping with them for whatever they need to make it with and you pay for it? That is the gift for them… and the gift for you is the actual thing that’s created. Your frugalist gets to have the fun of making it, which is what they enjoy, with the certainty that what they’re creating will be wanted and cherished. That’s a lovely feeling to have as you’re making something for someone else, believe me. 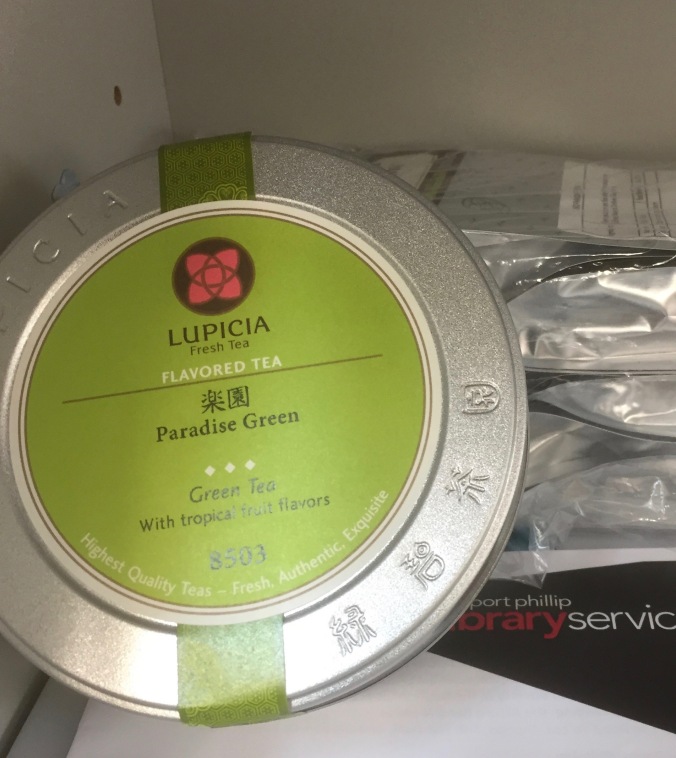 5. Buy or make them something edible.

Check on their likes and dislikes first – anyone giving me anything made with bananas wouldn’t like the dry retching that would go on after I unwrapped it!!

But an avid cook would probably like a couple of bottles of infused oil to play with, or some truffles or some home-made vanilla essence. Someone who’s a coffee drinker might like a couple of small bags of exotic coffee blends to try. Tea drinkers would love some gourmet tea blends and there are so many to choose from.

If you happen to be the good cook, then the whole world opens up for you. David25’s girlfriend, Izzy, brought around a plate of home-made chocolates as a gift from her mother for Christmas. I was mortified at first – I’d been out-Christmassed by a woman I hadn’t met yet! – but that feeling quickly passed as David25, Izzy and I settled in to watch a movie and eat the chocolates. They were delicious and made what would have been an ordinary occasion into something a bit special. Look, it’s nearly a year later and I haven’t forgotten them, (and just between you and me, I’m hoping that she does it again this year…)

One of the best Christmas gifts I ever had was when I was still doing my side-hustle as a Thermomix Group Leader. Our branch manager took us out for Christmas and we did a Foodies walking tour around the laneways in Melbourne. I wouldn’t actually class myself as a ‘foodie’, but it was so much fun!

We were led to little bakeries, chocolate shops, an Indian café that looked like nothing from the outside but had the most delicious Indian food in Melbourne. We went to another place in Chinatown to sample the roast duck and we ended up in a tiny grocery store opposite the State Parliament that had a cheese cave in the basement and also sold the best ice cream I think I’ve ever tasted.

Would I – the self-proclaimed frugalist- ever take myself on a walking tour like this? Never in a million years. Do I still remember it to this day? Absolutely.

7. Look at their interests, then think a little outside the box.

My oldest son, Tom26, has done this for the last two Christmases. He knows I’m addicted to reading, and he’s always been one to put a lot of thought and care into his gift-giving. What he’s been doing is looking up which novels have won awards in the year gone by, then he buys a couple of them and gives them to me.

It’s such a great idea! I don’t tend to buy many books, because I’m such a quick reader that a novel usually lasts me a day or two, which adds up pretty quickly at $30 a pop. The popular books are usually always booked from the library, so with Tom26’s gifts, I’ve been able to read some fabulous books that I otherwise wouldn’t have gotten around to read for ages, if ever.

Look at your own frugalist and see how you might tweak this idea for their interests.

8. Use your creativity to solve a problem your frugalist has.

Ryan23 didn’t just give me soap for my birthday. He also solved a problem for me. See this chart with the real-life names artfully coloured in? It eliminated a problem in our household that was really bugging me.

I live with 2 adult children. We all have our own lives to lead and we’re in and out of the house all the time. It’s all good. But when dinnertime approaches and I don’t know how many I’m catering for, it makes me antsy. I don’t want to create a huge meal and have only myself there to eat it, or, what’s worse, when no one tells me they’re going to be home and then 2 seconds after I dish up a meal for myself, they bound through the door and start looking through the fridge. It’s annoying and really inefficient.

I think Ryan23 got sick of the texts I’d send at around 5 PM saying, “You home for dinner?” He made this chart out of things that were hanging around the place. The boys just click a bulldog clip onto the nights they’re going to be home for dinner. I come home and can see at a glance how many people are eating here and I can cook (or better yet, make one of them cook) for the correct amount of people. If there’s a last-minute change they text me.

I absolutely love it. It cost Ryan23 nothing to put it together – just a few minutes of his time. I’m now no longer harassing the boys about their plans and it makes our lives that little bit easier.

So there you have it! 8 ideas to chew over when buying for that difficult but loveable frugal person in your life. Practical gifts that won’t create needless clutter are the ones to be looking out for. If you tailor your gifts along these lines, your frugal loved one will SO appreciate the thought that went into your gift.

And they’ll definitely notice the thought. How do I know?  Because being frugal means being able to pay attention to details. They’ll love that you noticed the little things about them that others maybe haven’t.

And this will make for the very merriest of Christmases!

Retire? But what will you DO all day?

Geoarbitrage: all the cool kids are doing it #3.