All … or nothing at all.

I’m pretty much an ‘all or nothing’ sort of person.

When I was two years old I was scared of dogs after I was bitten by one. Mum and Dad adopted a puppy when I was about seven to get me over the fear. It worked. When I was in my twenties, before I had kids, I bred and showed Cavalier King Charles Spaniels for years. I had MANY dogs. Poppy and Jeff are descendants of the dogs I bred.

I wasn’t all that fussed about having kids. Then I made four of them within five years.

I thought I might like to try and make a quilt. How hard could it be? It’s only lots and lots of straight seams, right? Literally twenty-seven quilts later… (and I even made one that had circles on it.)

Someone suggested I grow veggies to save money. Then my son grew very ill with depression and I thought that organic fruit and vegetables couldn’t hurt and might help. By the time I sold the house, I had well over thirty fruit trees and over 35 square metres of vegetable gardens. I had plans drawn up to grow a food forest in the front yard.

So you can imagine that when I dig my heels in and purchased Scout, my family was worried. But so far, I’ve been good. There’s still only one miniature wire-haired dachshund living in The Best House in Melbourne!

I have a new rule for clothes shopping. I don’t buy it if I don’t love it. We all have things that we bought because we thought they were ok, but they were so cheap!!! Then they live in the dark recesses of your wardrobe, barely if ever seeing the light of day, until they get donated five years later. Not so cheap if you don’t actually like them enough to wear them, right?

I’m VERY all-or-nothing when it comes to clothes shopping. In 2013 I was a thermomix consultant and I earned a free trip to Hong Kong. One day some of us took the train to the border and we went shopping in Shenzhen, China. I came back with fifteen dresses, jewellery, ugg boots that I still wear as slippers to this day, woollen jumpers and who knows what else? I could barely close my suitcase and I learned the lesson that you should ALWAYS buy a suitcase with wheels. However, I’ve barely bought any clothes since. I’ve been happily wearing my Shenzhen wardrobe.

In fact, I did my figures for 2018 on New Year’s Day. Last year I spent a grand total of $35 on clothes, mostly on a jumper and some t-shirts for the North Korea trip. The year before it was $0, unless you count $30 to get a pair of Aldi boots resoled. To be fair, this was when we were living through the bridging finance, when 54% – 74% of my take-home wage was going to the 750K loan on The Best House in Melbourne. Money was slightly tight.

I may have run slightly mad over the last couple of days. Clothes will definitely last if you look after them, but they don’t last indefinitely. They get faded, stained or damaged. Shoes are durable, but eventually, they get scuffed and tired -looking. For the last couple of years, no one at work knew if Frogdancer Jones was going to turn up looking presentable or if she’d turn up looking as if she’d pitchforked clothes from the rag bag onto herself.

It was time to turn my attention to my attire. 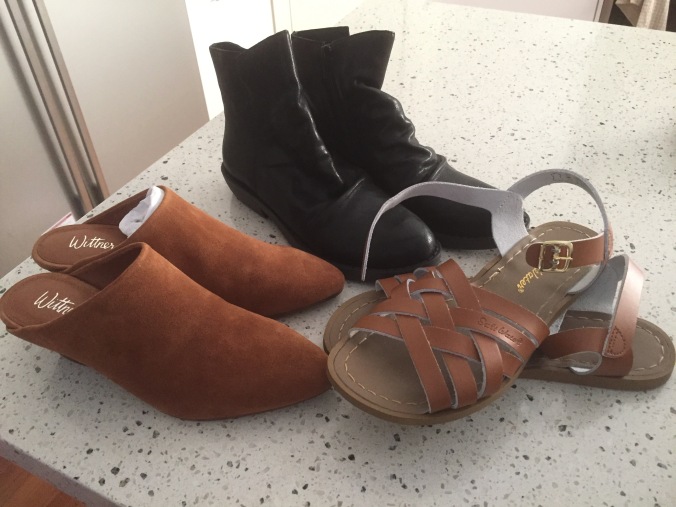 I’m now the proud owner of five pairs of new shoes. Two pairs of flats have yet to arrive in the mail from Scarlettos, while I bought these beauties today. I used to walk past the shop for years and glance at the displays, but never even go inside, because I knew I couldn’t afford them so why go in and look?

The black boots are obviously for winter, though I wouldn’t be surprised if I wear the $60 Aldi boots for the fourth year. After all, they’ve been re-soled, right? Waste not, want not!

But today, I was primarily looking for clothes, particularly tops to go over the Bali pants Mum and Dad brought back with them after their last holiday. I thought I’d buy about 5 new casual tops that I can wear for work. Nothing too drastic…

But no one told me that stripes and linen were back in.

I wandered into David Jones all unaware of this fact, and staggered out of there under the weight of many shopping bags, $800 poorer but with a new wardrobe that will make me look GORGEOUS! I was lucky that the Christmas sales are still on, but just between you and me… I’d have bought most of these things without the sale. Remember? I don’t buy clothes I don’t love.

Speaking of that, there’s been a site I’ve been stalking for two years that has clothes that I adore. Unfortunately, they’re mainly made for stick-thin people, but they have wraps and coats that cater for portly frames like mine. I haven’t bought a thing from them for two long years. I kept looking at their emails, then deleting, saying, “No. I’m not ready yet.”

However, it’s possible I may have spent the first day of 2019 buying  $400 worth of swishy and drapey outer-wear for autumn and winter from them. I guess I’m now set for clothing for the next few years. Woohoo!

I’m already aware that this time next year, when Future Frogdancer Jones is going through the figures for 2019, she’ll probably be wincing a bit. I’ve spent an inordinate amount of money on clothing and shoes this week.

But you know what?

I’m really looking forward to hearing what the beautifully dressed women in The Danger Zone* will say when I keep turning up in wonderful clothing, day after day after day. After day. (Yes, I did run a little crazy…)

I’m looking forward to finally wearing clothes that look like ME, instead of clothes that are old and were always bought with an eye for price rather than anything much else. Those clothes are a real downer to wear when that’s pretty much all you have to choose from.

There are around two and half of you who have been reading this blog for a while. You’ll remember that I class myself as a value-ist. I only like to buy things that I hold as adding great value to my life, while I’ll be dragged kicking and screaming before I’ll waste money on things that I perceive as NOT doing this.

After I hit publish on this post, I’m going to pour myself a shiraz, then I’ll go into my wardrobe and start culling all of those faded, stained ‘ok, but so cheap!’ clothes. When that’s done and my new clothes are all washed, ironed and hanging up in there, my wardrobe will be a thing of beauty.

And so will I. 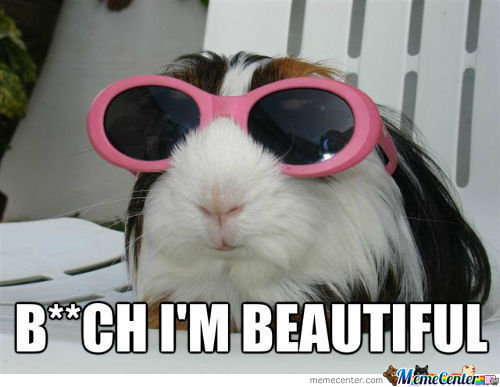 * The Danger Zone is the nickname that our little section of staff room 2 is called. I share it with Blogless Adrian, Blogless Liz and a group of young twenty-and-thirty something girls who all look fabulous. Fortunately, they’re all fabulously nice as well. It’s a happy place.

Consumerism, Delayed Gratification, FIRE as a single., The 'why' of FI.