I think that the road to financial independence as a single has a big and clear advantage. There’s a reason why a ship only has one captain and why too many cooks spoil the broth.

I’m a member of a few “Single FI” threads on FB and I’ve noticed a bit of a trend in the last couple of weeks with people having a whinge about how much harder it is for singles to reach Financial Independence in a world apparently geared for couples. According to these people, housing is more expensive, food is more expensive, entertainment is definitely more expensive. It’s not fair! Those selfish couples with their unfair societal advantages are rubbing their privileged FIRE journeys into our disadvantages singes’ faces!!!

At first, I was just “meh” about it. I don’t know these people and I have no way to walk in their shoes. However, as more and more people started chiming in, it got me thinking.

Why is my thinking about financial independence as a single so different?

I’ve been single for the last 21 years, ever since I left my husband. I walked away with my 4 boys aged 5, 3, 2 and 11 months. For the first 4 years, I was supporting us and paying a mortgage on the Sole Parents’ Pension, which (from memory) was around 18K a year. After my youngest son started school, I began working full-time as a teacher.  People ‘pooh-pooh’ teacher’s wages, even in Australia, but compared to the pension I felt we were on Easy Street.

So, long story short, for the last 21 years my family has been supported by one wage, controlled by one person. Why do I see this as not necessarily the disadvantage that others do?

Yes, on paper it would have been far easier if I’d been fortunate enough to meet someone compatible who could bring another wage into the household. Imagine all the investments we could have made once the mortgage was paid off?? We’d be rolling in money!

But I don’t know that it would have automatically happened quite like that.

Lifestyle creep appears to happen with almost every couple I’ve ever seen. Sure, the prudent ones max out their super funds and put aside money for investments and for a rainy day. The really smart ones have a healthy ‘FU Fund’ like the one I have. But even so, as life goes on and couples start to earn more, the little luxuries start to become part of the everyday. Clothes get nicer. Cars get newer. Houses get bigger. Holidays get more glamorous and are often spent further away from home. No more caravan park holidays at the Rye back beach! Now it’s taking the family to Thailand or Fiji or, (if you really want to make it memorable), to Iceland to see the Northern Lights. 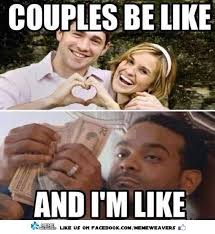 The food budget goes up too. Not just on the average shop, but also when eating out. Dinner parties at home become far less common, even for lunches. Everyone wants to go out to eat. Theatre tickets replace movie tickets and lunches at wineries replace picnics in the park.

There’s nothing inherently wrong with this, of course. You’ve both worked hard to get where you are and you deserve to taste some of the finer things in life. Your wife/husband/partner or yourself earned that big promotion and the expectation of the people around you at that new job is that you look the part. So, gradually, you do. It’s human nature to blend in with the tribe, after all.

I’m sure that with even the best will in the world, even the most perfect partner will come with some expenses in tow. There is no way that a man or woman would say, “Here’s my entire pay packet. Take it and invest it for our future. I have no wants, needs or desires. None whatsoever!”

Of course, some single people also fall prey to lifestyle creep. But when you’re on your own, it’s just YOU making the choices. I remember some of the (what I thought was) stupid things my ex-husband used to spend money on. So annoying. But I’ll bet that he could say the exact same thing about me. Everyone has things that individually drive them and if you’re snugly coupled-up, you have to accommodate the other person’s things, or you won’t be very snug for very long!

Rather than focusing on what we as singles don’t have –

someone to lift heavy things and open jars;

unbridled romance every time s/he walks through the door…

– we singles should be happy for the clear advantage of what we do have:

The opportunity to set a financial game plan in place and execute it without another person’s distractions or agenda getting in the way.

It’s also an advantage that each person who’s single has, regardless of how much income they bring in.  Of course,  couples may very well be on the same financial page, working together for the benefit of their relationships, but we all know that it’s not the truth for each and every couple.

But we singles can choose the destiny of every dollar we bring in. On the path to FI, that’s not to be sneezed at.

There’s a lot to be said for personal, as well as financial independence.