Advertising – North Korean style (1): Where leaders are larger than life.

A little while ago I was sitting at home on the couch,  a dog either side of me and one balanced on my lap with my laptop, reading blogs before going to work. It was about 6AM, still dark and pretty chilly, and I was filled with impotent anguish about having to grab my things and leave for work in the next 20 minutes to catch my train.

Be that as it may, that morning, as I was working my way down the list of blogs in my feed reader, I saw there was one by The Escape Artist. Ever since I heard Barney on the Choose FI podcast, I’ve been reading his blog. Turns out on this particular morning he’d written about advertising. If you haven’t already read it, go ahead. I’ll wait. 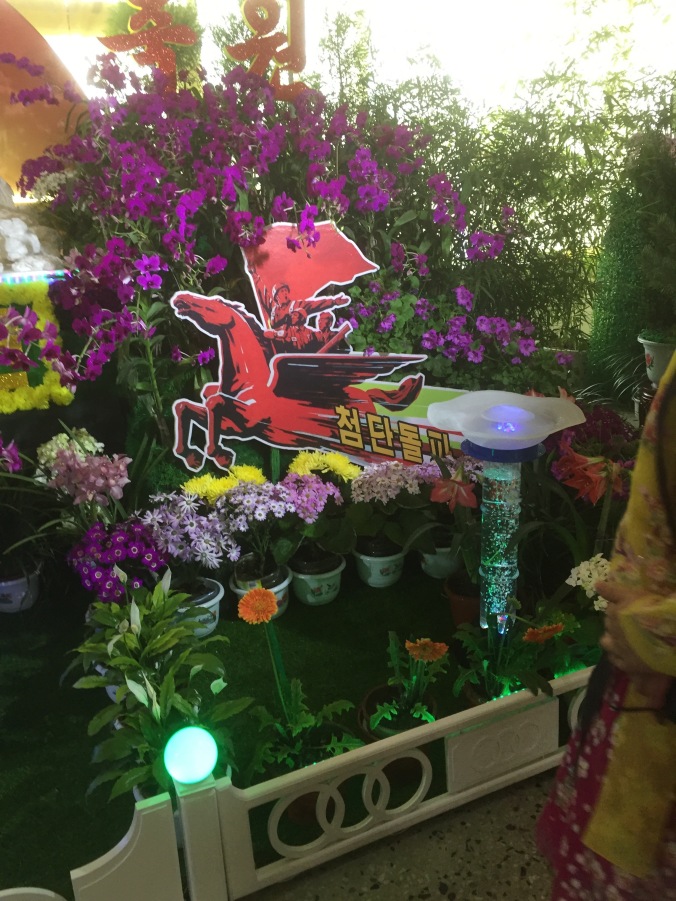 Barney wrote about the power of advertising. I loved his post, but one thing struck me. It’s all too easy to read about the hold that advertising has on us, particularly when we’re galloping along on the road to FI/RE, being frugal, getting out of debt and investing the surplus money we have kicking around.

“Oh yes, advertising is evil but it doesn’t affect me!” we say as we prepare our home-made dinner and settle into a night at home with a board game or book or Netflix binge.

But this is all slightly smug. How do we know how deeply or not we’re affected when we’re already neck-deep in a society that’s awash with consumerism? Is there any way to tell how advertising affects us when we’ve been bombarded with “Buy this!” “Subscribe to that!” since we were in our cradles?

What if you were able to visit another society where consumer advertising was not and never has been a ‘thing’? That’s a huge point of difference right there. But instead of being indoctrinated into the joys of buying the latest fad, these people have been immersed in the advertising of a totally different kind of commodity.

Enter North Korea. Absolutely no consumer advertising whatsoever. Not so much as a single billboard about a single product. Instead, there’s advertising of a very different sort: the constant stream of adulation about the leaders and the regime who run the country.

The beauty of this trip for me was that because it’s indoctrination of a totally different sort to the one that we’re used to, it sticks out. We can observe how it’s being done and we can’t help but notice the effect it has on the population. Some of the methods they use are very obvious; others are more subtle, but they all tie together in an intricate jigsaw that holds the population in thrall. Probably like consumer advertising does with us.

The people of North Korea have absolutely no access to the internet. Their intranet has around 6 websites and they’re all run by the Government. Their tv is filled with patriotic songs, marches and military films of missiles going up and tanks being paraded around. Their ‘news’ programs are chock-full of absurd statistics of how well the country is doing in every conceivable way, under the wise and loving leadership of Marshal Kim Jong Un. Anyone coming into the country have their bags searched in case anyone tries to bring in literature such as travel books, newspapers and bibles.

I’ll be writing in the next few posts about how the government of North Korea has harnessed the power of advertising and has used it to sell itself to the people. This will take several posts to cover, as I want to look at a few different ways that they’ve manipulated sights, sounds and messages to convincingly sell their brand to the population. Just as advertisers work their psychological games out here in the West.

But first, a little background:

For around 150 years, up until WWII ended, North and South Korea was all one country under the control of Japan. The Japanese treatment of the Koreans was very harsh, to say the least. Korea was looked on as a resource to be exploited, with both its natural resources (such as gold, timber and fishing) and its people, being taken full advantage of.

Kim Il Sung was the first leader to take control after the Japanese were booted out after WWII and the Korean peninsula was divided arbitrarily into North and South by the Americans. He was a soldier in the USSR army during the war and the Russians put him into power in Korea when a leader was needed, but the North Koreans firmly believe that he was a freedom fighter against the Japanese and this was what caused the Japanese to leave Korea. They aren’t told about Hiroshima and Nagasaki. So Kim Il Sung was and will always be the saviour of the Korean people.

This belief is fostered in many ways. The use of statues is one that is used extensively throughout the country.

This photo is a place in the middle of Pyongyang which we reached as the sun was starting to go down. The people of North Korea love their current leader, but they absolutely revere the two leaders that have gone before him, particularly his grandfather, Kim Il Sung, (the one on the left.) Visitors to this site are encouraged to buy flowers, which they then lay at the feet of the Leaders, then you go back to your group and you all bow in unison. Then you quietly leave to make way for the next group.

The symbolism is obvious.

The whole area is laid out on a grand scale, with enough space for a few hundred people to gather. There is silence, enabling contemplation of the leaders and all that they’ve done for society. Their statues tower above us. There is a picture of Mt Paektu behind them, which is the most sacred of all the mountains in Korea, and where the second leader, Kim Jong Il, is said to have been born. (He wasn’t – he was actually born in Russia but the North Koreans don’t know that…)

These statues were in a regional city that we went to for lunch after we visited the DMZ. It was a dull day and yet the bronze figures shone in the little light that was around.

Here is the way leading up to them. The two figures are set high above the city, with solar panels attached to the lights that illuminate them at night. Power blackouts are a frequent occurrence in the DPRK, but these statues will never be in darkness. The leaders will always be there, shining a constant light over the whole city as they gaze benignly down over all.

Again, the symbolism is obvious.

This is the ‘old town’, one of the few cities in North Korea that wasn’t flattened by the US bombing in the Korean War. This view is less than 2 minutes walk from the statues in the photo above. Compare the feeling of space and tranquillity around the statues compared to the cramped conditions here. Elsewhere in the town there are apartment blocks that date from after the Korean war, but these of course also have people living together in close quarters.

So much space, serenity, landscaping and light surrounding the images of the Leaders enlarges their importance in the minds of the population. It’s an effective piece of the jigsaw.

It’s not just in the towns. The pervasive cult of personality pops up everywhere. This is a statue located on a co-operative farm midway between the capital city of Pyongyang and the coast. This statue is huge, but it’s not anywhere near a large population base – it’s out in the middle of the countryside. The story behind this statue made my blood boil, but it also clearly illustrates the importance that the regime places on “advertising” itself to the people.

For around 30 years after the Korean war,  North Korea outstripped South Korea in terms of quality of life. Then came the collapse of the Soviet Union. Suddenly, there was no more food, machinery, fuel and financial help coming from a superpower to prop up Kim Il Sung’s grossly inefficient methods of running agriculture and industry. Within a couple of years, North Korea was plunged into a famine that lasted from 1994 – 1998 called ‘The Arduous March’. It’s difficult to know for certain just how many people starved to death during this time, due to the secretive nature of the government and the fact that many death certificates listed differing causes of death, but estimates range from 2 – 3.5 million. In a country with a population the same size as Australia, (25 million), that’s a significant proportion.

This particular co-op farm, growing mainly green vegetables and grains, had been visited a couple of times by Kim Il Sung during the 1980’s. The farmers asked him if they could put up a statue to celebrate the honour of his visits and he refused them, saying that it was unnecessary and that they were already doing important work.

Three years after he died, his son (Kim Jong Il) suggested that now was the time to build it and so here it is. The farm is so proud of it and it depicts actual people who were working there when Kim Il Sung came to visit. This story is all very nice and cosy…

… except if you’ve done your homework and you know that in 1997 famine was laying waste to millions of people in North Korea who were literally starving to death. People were eating grass, bark and anything they could to survive, particularly in the north of the country, far away from the major cities.

Meanwhile, here’s Kim Jong Il, in the middle of all this, telling a FARM to give up land and resources to erect a monument to his father. I don’t know that I could find a clearer story to illustrate just how important these symbols are to a government committed to portraying itself as the saviour of the Korean people. See how Kim Il Song cared about the farmers gathered, (dare I say… “worshipfully”) around him?

In the car park of the farm was this massive stone document, giving what I think are the words of one of the speeches Kim Il Sung gave when he came to the farm. It’s not just images of the Leaders that loom metaphorically and physically over the people, it’s their words as well.

The woman cleaning it wasn’t there purely to make it spick and span for our benefit – any images of the leaders and their words are expected to be kept immaculately clean at all times, as a mark of respect. Still, I’m sure she would’ve preferred to have been finished before a bus-load of tourists pulled up…

In a country with no billboards, video screens and magazine ads about anything other than how fortunate they are to have had such caring, capable and almost god-like leaders, it’s easy to see how huge monuments like these are an integral part of selling the sizzle. The people are told from infancy that their leaders are giants among men and are larger than life – and so how fitting it is for the population to see them literally depicted as such. 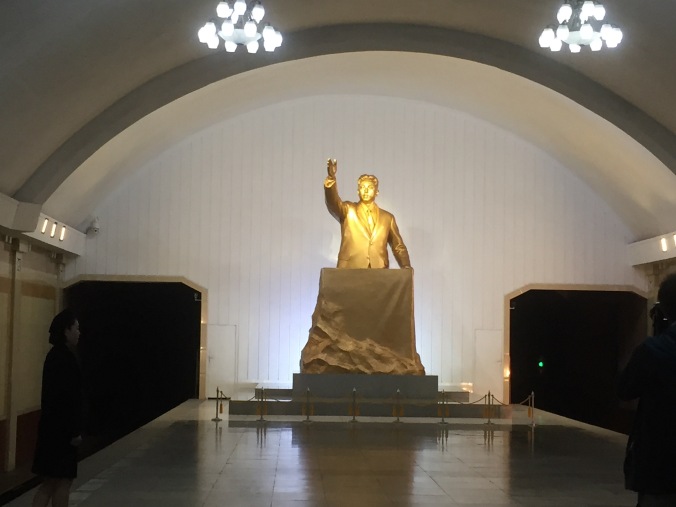 I’ll leave you with this photo taken in a station in the Pyongyang metro. Imagine seeing this every morning and evening on your commute…