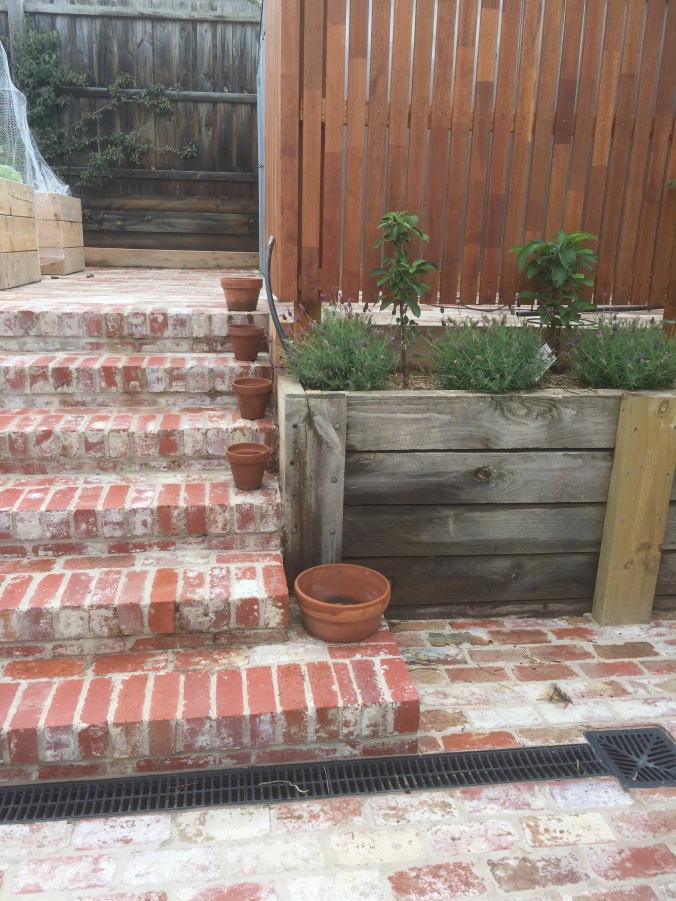 The quest to make The Best House in Melbourne as schmicko as possible for when Old Lady Frogdancer pulls the pin on full-time work has reached another stage. Previously, I had the backyard paved with beautiful reclaimed bricks, all fully grouted in so that Old Lady Frogdancer won’t break a hip bending down to pull out a weed. I’ve installed wicking garden beds to save on her water bills and to make sure her organic veggies stand the best chance of surviving in a drought, and the permanent plants such as asparagus and apple trees have been planted, so that the old girl won’t go hungry.

One of the neighbours stopped and asked me about how much the bricks cost. He’s a builder and he got all of his from work. He said he paved a similar area for around $150. Mine cost astronomically higher than that. I should have been a builder instead of going into teaching!

The question is – do I finish the backyard by putting a roof over the lower part and creating a huge outdoor room, or do I finish the paving by getting the sides of the house done?

The roof would be more fun…

… but when I was talking to my new neighbours the decision was pretty much made for me.

Early on in the life of this blog, I wrote about the nightmare of a house that was being built beside us. You can quickly skim through the post here. Three years after the build began, the owners have finally moved in. They’re a young family, with 4 kids under 4, (they went for baby number 3 and got twins instead), and two dogs.

The dogs sound like bad news for my pack. They’re staffies and, according to my neighbour, they hate little dogs. He suggested replacing the fence with one that’s as high as we’re allowed to go to stop his dog from jumping over it to get mine. I suggested digging down to put wire so that my stupid dogs wouldn’t dig their way under.  I’m not rapt with the sound of these dogs, as my 3 wouldn’t stand a chance if it came to a fight. The Cavaliers only have half their teeth left and Scout is only 3 inches tall.

Thankfully, the neighbour is just as keen as I am to make a secure fence. As he said, “I don’t want my dogs being put down.” So we’re both on the same page with keeping our animals safe and definitely apart.

So along with the fence, I’m putting paving all down the sideway right up to the fence. There’s no way anyone can dig their way through a brick path, no matter how determined they might be. Old Lady Frogdancer will have a weed-free life and Poppy, Jeff and Scout will live to a ripe old age. As will Old Lady Frogdancer, of course!

The landscaper began work a few days ago and has already had to book a plumber to unblock a pipe we need for drainage. I’m consoling myself with the thought that I can deal with the problem much better now than if I was old and retired. Suddenly, the fact I have a job and a regular wage is a comforting thought!

When I lived in the old house, I gradually put in a food forest with an eye to feeding us all in the years to come. When my plans changed and I sold that house, I knew that someday, I’d like to do that again. I enjoyed the fresh produce, as well as the ‘science experiments’ of gardening, where you try this idea and that idea and see how it works.

Currently, with just under 2 hours a day being snatched by my commute, I don’t have a lot of time to spend on a garden. But that’s ok. I’m slowly setting it up by building the solid infrastructure and then over the next few years I’ll play around with it, slowly building up the soil so when Old Lady Frogdancer retires, it’ll all be there, ready to go.

The new fence will cost $1,200. The next stage of the landscaping work has been initially costed at 10K, but the plumber and the installation of a watering system for the non-wicking beds will probably send that amount skywards. I’m thinking I’ll probably get him to use any unused bricks to put a border at ground level around the lawn near the fence lines, so that a lawn mower can run over the bricks and the grass will be kept under control. More dollars, but it should make Ryan23’s life easier, and when she’s all alone in the house after the boys leave, Old Lady Frogdancer will be able to mow her lawn without a care in the world.

On the face of it, it’s all a huge amount of money to spend. But, as usual, I’m looking at the long view. The current fence is falling apart. The new one will last at least 20 years. The paving will last forever. I really like to do a job properly once and then not have to do it again. (That’s why I hate housework.)

My goals in retirement are to travel and to potter around at home doing anything I feel like doing. I have absolutely no desire to have a ‘side hustle’ in retirement, though I may work part-time in teaching as I get closer to it. Once I finally reach my FI number – I’m parking my fat behind on the couch and doing whatever I want to do.

So in the short term, this project is extravagant. But in the long term, it fits in with setting up my house to be exactly what I want for retirement. I also quite like the idea that I got the boring stuff done first – now I can save up and get the fun stuff, like the roof, outdoor furniture, outdoor lighting etc.

Here’s the first part of the new fence. I’m loving it. It’s very tall and very new. It’s nice to have a checklist of things that I want to have done by the time I retire, and it’s a good feeling to be able to tick one item off is a good feeling.

By the end of this week, the paving on both sides of the house will be done and that’ll be another tick off the list. Sadly though, the money I put aside from the sale of the old house to attend to the backyard will be gone, so I’ll be cash-flowing the rest of the projects. By retirement, my goal is to have my house totally ready to house me and mine for the next few years without a thing to be done to it – all the little niggling jobs will have been taken care of while I still have a wage flowing in.

My plan is to cashflow while leaving my investments to burble along contentedly without me. Though if the stockmarket takes a sharp dive, that plan may change.

Ahhhh, life! You never know what’s going to happen. You wouldn’t be dead for quids, hey?