Living on a Prayer.

Last Saturday night my friend Blogless Megan and I went to the MCG to see Bon Jovi.

Not my usual genre of music, but when I heard that they were coming I knew I had to get a ticket. Not for present Frogdancer, but for Past Frogdancer. I haven’t blogged much about life when the kids were little, but when we were living on the bare bones of our backsides, there was a song that was one of my absolute anthems of hope. I’d sing it with the boys, changing one very important line, and we’d belt it out and I’d put my heart and soul into every word.

“We’ve got to hold on to what we’ve got.
It doesn’t make a difference if we make it or not,
We’ve got each other and that’s a lot for love…
We’ll give it a shot.
Woah, we’re halfway there
Woah, livin’ on a prayer!
Take my hand, we’ll make it I swear!
Woah, livin’ on a prayer!
Livin’ on a prayer…
Oh, we’ve got to hold on, ready or not
You live for the fight when it’s all that you’ve got –
Woah, we’re halfway there!
Woah, livin’ on a prayer!
Take my hand, we’ll make it I swear,
Woah, livin’ on a prayer.”
I’m reading through these words and I’m starting to tear up. At work, at my desk. I’d better get a grip. But it brings back those days so clearly, when I was so scared I was going to somehow muck up the boys and we’d disappear in a puddle of failure.
When I left my husband, my boys were 6, 4 and  3 years old, while the baby was 11 months old. Our assets were a house that had a 100K mortgage, 2 ancient vans and a joint bank account with $120 in it. I closed that account and gave him half. The boys and I began our new life together with $60 cash, a mortgage repayment, (my ex was supposed to pay it as child support but he soon stopped when he realised I was serious about the whole ‘separation’ thing) and not much else.
I was definitely living on a prayer. The boys were so very young and they depended on me to keep everything together, safe, secure and free from drama. I was determined to give them the normal middle-class life that they were entitled to have, whether or not they had both parents around. No one forced me to marry the man I did, but I was utterly adamant that my poor choice was not going to hold them back in any way. I just didn’t quite know how I was going to pull it off.
This song had so much in it for us. The complete love we had for each other. The fact that we were all in it together, holding on to what we’ve got and moving forward together.
Of course, anyone who has an ounce of grit in them will see the lyric I still change every time I sing it. How can it NOT make a difference if you make it or not? It makes all the damned difference in the world, especially when you’re looking down into the four little faces of your tiny sons who depend on you for everything in their lives.
So I sing, “It DOES make a difference if we make it or not.”
No room for error here, thanks. The Frogdancer family wasn’t going to go down the gurgler if I had anything to say about it!
So I had to go and see this song being sung. I owed it to that scared but determined mother who left her husband because it was the best thing for her little boys. The one who lived for 4 years on the sole parents’ pension of 18K a year, paying the mortgage and keeping food on the table and grimly treading water financially, waiting for the time when her baby was off to school and she could go to work again and try to get ahead.
So here’s what happened.

Every bogan in Melbourne was there. This gif illustrates the typical bogan couple in a recreational mood. Some people were wearing mullet wigs, but an impressive number of men and women were sporting home-grown mullets and Bon Jovi t-shirts stretched out over middle-aged paunches.

I’ve always been a pretty lucky person, even when times were tough and it didn’t seem like there was much light at the end of the tunnel. When you look back, there’s always been luck working on my side. Fortunate Frogdancer struck again at this concert.

Exhibit A: I defy any woman reading this to NOT be impressed by this.

This is a ladies bathroom at a major event in a stadium seating 100K. There was NO QUEUE. This is unheard of. And yet – you see the evidence.

After visiting the Women’s, Blogless Megan and I felt the need to rehydrate with an alcoholic beverage or two. Look! We had open space at the bar! It took around 20 minutes for the hordes of thirsty Bon Jovians to find this bar and fill up the place. By then, we’d tucked away 2 wines and were chatting away like ladies. 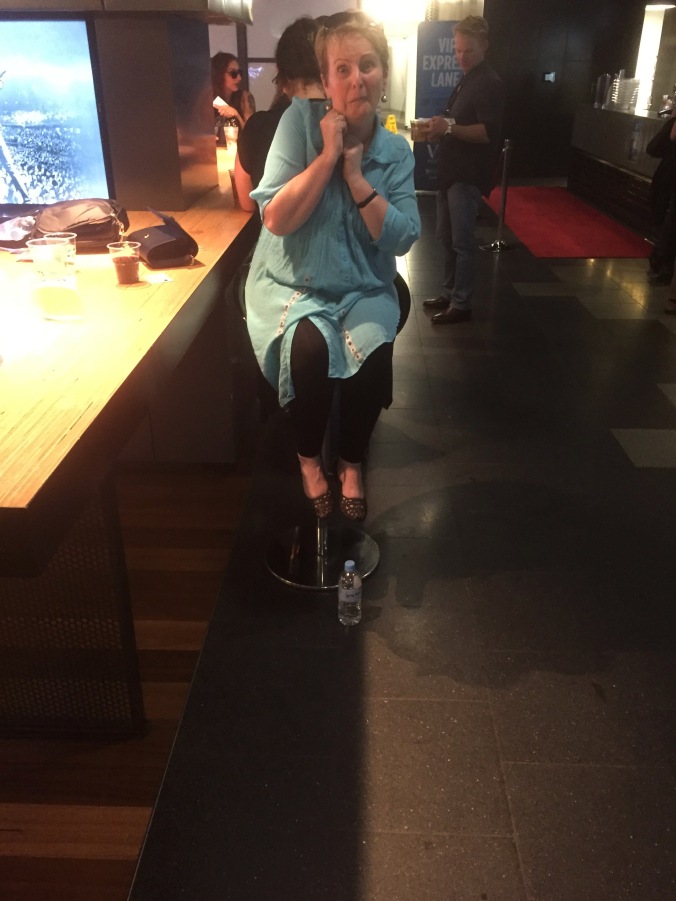 I also discovered that I’m still nimble enough to leap like a gazelle up onto this VERY tall stool. See where my feet end and the bottle of water begins? That stool was HIGH!!

After our drinkies, we found our seats. When we were looking at our obligatory selfie, Blogless Megan noticed the woman behind my head. I have no idea what she has in her mouth…

Our seats were right beside where the sound people are. That meant that we were in the perfect place to get the best sound. Fortunate, hey?

Then look what happened!! These freakishly tall people came and sat in front of us. The guy on the left was literally 6’6 at least and he sat directly in front of me. I silently sighed, resigned to my fate. I’m 5’2″.

But then he and his wife had a quick exchange and then swapped places!!! I leaned forward, tapped her on the arm and said, “OMG, I love you!!” They laughed.

Blogless Megan tapped me on the arm and said, “We’re in the same row as Molly Meldrum.” She took a sneaky pic. See him in the cowboy hat???

Molly Meldrum used to host Australia’s version of MTV back in the 70’s. He was hugely influential in the music scene.

Gently boring, to be honest. Here’s the setlist.

For the first HOUR, there was only one good song. ‘You Give Love a Bad Name’, which the crowd belted out as one. It was great. The rest were from their latest album, which 95% of the crowd didn’t know.

I just stood there, listening to the music and watching the crowd. I wanted to hear, “It’s my Life’ and of course, ‘Living on a Prayer.” I knew my time would come.

After the first hour, the concert got more interesting. There were a couple of songs that I vaguely knew, so that was good.

Lots of mobile phone action during a song where he talked about lying down in a bed of roses. Sounded dangerously prickly to me, but it seemed to be a crowd favourite.

So how was ‘Living on a Prayer’?

Fantastic. I sang that song with everything in me. So did the rest of the crowd. It was amazing.

Would I go to see them again? Nope. I’ve scratched that itch for Past Frogdancer. She never dreamed that one day she’d be sitting in a $260 seat, just to hear her song being sung. Her kids have grown up and they’re doing fine; she’s well on the way to FIRE and she lives debt-free in The Best House in Melbourne.

The line of, “You live for the fight when it’s all that you’ve got” was how she lived her life for years, with extreme frugality being her main weapon. Imagine if I could send a message back to her – to tell her to chill, that everything was going to work out fine.

I can’t do that. So I stood there at the MCG and sang her song.

Delayed Gratification, The 'why' of FI.