You can have everything you want… just not all at the same time.

Sometimes when we’re on the road to FI/RE it seems like nothing’s happening. We set up our finances, we learn about asset allocation and we teach ourselves what how and why to invest. Then, once all that’s done, it seems like it takes forever before we get what we want. We keep commuting into work, putting in the hours, daydreaming about how different our routines would be if we were financially free…

But yesterday, something happened that got my mind on a different track. See the gorgeous Maple tree I’m carrying like an umbrella? I’ve wanted a Japanese maple tree since forever. And now I have one.

Over the years I’ve noticed that I always get what I want. Always. The only ticklish thing is that it’s rarely at the moment that I first desire it.

Delayed gratification’s definitely a recurring theme in my life. I can’t remember which famous person said, “You can have everything you want – just not all at the same time.” It was probably Oprah, Gandhi or Mussolini. Whoever it was, they were absolutely right.

And now I want FI/RE. 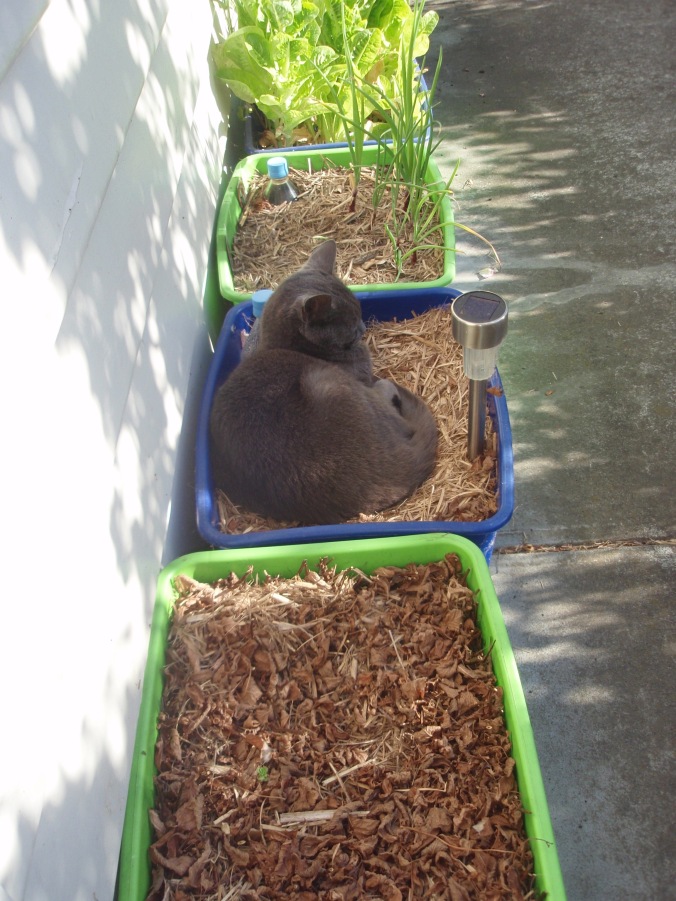 Years ago, back when I was a mere child, I thought that one day I’d like to own a grey cat. I don’t know why – maybe grey goes with any decor? I’d already fulfilled my ambition to own a tabby cat after reading Paul Gallico’s beautiful novel ‘Jennie’, and a grey cat was the next desire.

I’d completely forgotten this until I was looking for a kitten to give to David12 for Christmas. I went into the Lort Smith Animal Hospital, because back then you could get a desexed and vaccinated kitten for $50 and save it from being put down, which fulfilled both my strict budget requirements and the ‘feel good’ factor. I walked in and there in the kitten room was a skinny grey kitten with huge green eyes. My childhood dream came rushing back to me.

I ended up walking out with two kittens – Daphne and Maris. You should have seen Jordan12’s face when he opened the box under the Christmas tree! Maris lived to a ripe old age and this was a photo of her favourite sunning spot. I could never plant anything in this wicking box because it was ‘her’ box. 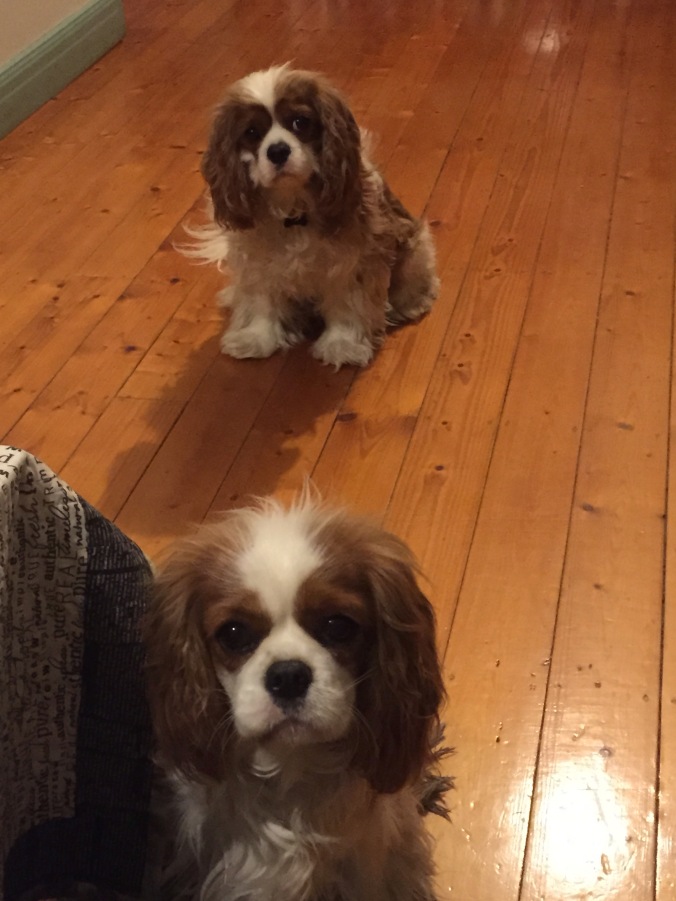 The Cavaliers are another example. When I was a kid we lived on a busy road. It was murder (literally) for pets. Our third dog, Bonnie, survived for about 4 years and we thought she was safe. Past the silly puppy years… you know what I mean. She wasn’t. We didn’t know which breed she was until 5 years later, when I picked up a book of dog breeds at my boyfriend’s house and there on one of the pages was Bonnie.

Two years later I bought Sarah and I ended up breeding and showing many beautiful cavaliers for about 6 years before I started breeding baby boys. I’ve owned cavaliers for the past 30 years. Poppy (on the bottom) and Jeff (on the top) are direct descendants of Sarah and are the latest in a very long line of Cavalier King Charles Spaniels that I’ve owned.

Sometimes when wishes are granted, you get far more than you bargained for!

I waited a long time for this one. This is Evan18 on his Valedictory night. He was the last one to get through secondary school. After putting everything on hold for so long for the four boys – this night was a huge milestone for me. I had a long-term goal of getting to Europe and I said I’d do it when all of the boys had finished high school. Look at my face. I’d already booked the tickets!

This is an example of a milestone that I knew was coming. When going for FI there’s always dollar figures that we know we’ll eventually reach if we keep on plugging away. You feel like the cat who stole the cream when you reach them.

I’ve always wanted someone to throw me a surprise party. It never happened, until my first year 12 Theatre Studies class threw me a surprise dinner when I took a term off to go to the UK and Europe. Look at their naughty little faces! They got Evan19 to pretend that he was going to take me out to dinner – and then up they popped. Such a lovely group of kids. And without knowing it – they brought another wish to fruition, but not in a way that I would ever have forseen.

How often does this happen? An opportunity pops up and because we’ve been looking at life optimisation, we recognise it and grab it? An unexpected windfall, a job offer or something? It’s not always a hard slog to the finish line – unexpected surprises can pop up and brighten the way.

When I was planning my big trip to Europe when I was 15, I would have been aghast if I’d known that I wouldn’t make it over there until I was 51. This is Westminster Cathedral. The history that’s buried within these walls is incredible. I felt like this was my spiritual home In London.

In a funny way, being forced to delay my trip for a few decades meant that when I finally got there, my knowledge was so much richer. I’d had the time to read, to think and to broaden my view. Instead of racing through the cathedral to tick it off a list, I was able to wander around, getting goosebumps at sometimes what seemed like obscure little markers and gravestones – unless you know your history and realise who these people were.

Sometimes the roadblocks and delays end up being a good thing. The trouble is, it’s very difficult to see that at the time! It’s only later that we look back and recognise the benefits.

I’m a Tudor history girl, so a trip to Hampton Court Palace was an absolute must. It was where Henry VIII lived, after all! Look at the red velvet cloak that I was swishing around in. It was in the middle of summer, but for an Aussie, it was still a bit nippy.

This was the realisation of a long-held ambition. I was so happy. I consciously revelled in every moment. 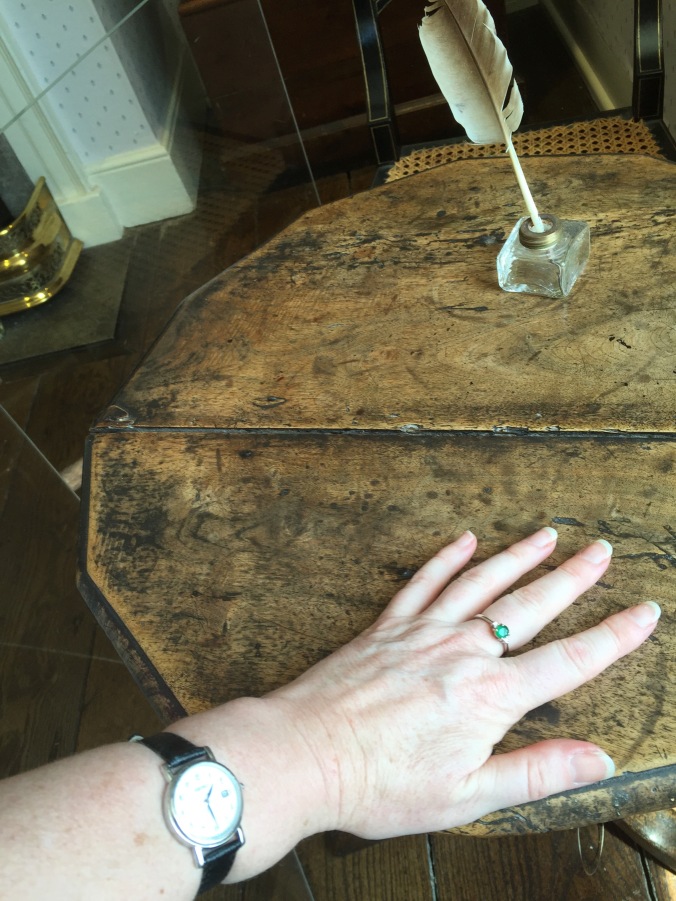 This photo has 2 things that have come to me late – one that I intentionally organised and the other was pure serendipity.

The emerald ring is one I bought when the boys and I went to Thailand in 2007 – a full 20 years after I saw a friend’s brilliant emerald ring and loved it. Many emeralds are a bit wishy-washy in colour, so when I saw this one for sale at the resort’s gift shop I had to have it. It was practically the only souvenir I brought home with me. I’d never forgotten that ring and I was ready to pounce when I saw the chance.

The other one was pure luck. See the table? This is the VERY TABLE THAT JANE AUSTEN WROTE HER NOVELS ON. I went to her home in Chawton with a friend, but I had no idea that so many genuine artefacts were there. I’ve touched her writing desk with my own hand. (Well, I could hardly have touched it with someone else’s, but that’s beside the point.)

Sometimes the things you encounter along the way are the most beautiful surprises.

Here’s another goal that I kept in front of me for years. Haworth parsonage, where the Brontë sisters lived. I booked my mini-tour through England because this was one of the stops. This was a milestone in my life. It was a goal I’d set since reading ‘Wuthering Heights’ and ‘Jane Eyre’ all those years ago and it was so darned satisfying to walk through and be where they had been. 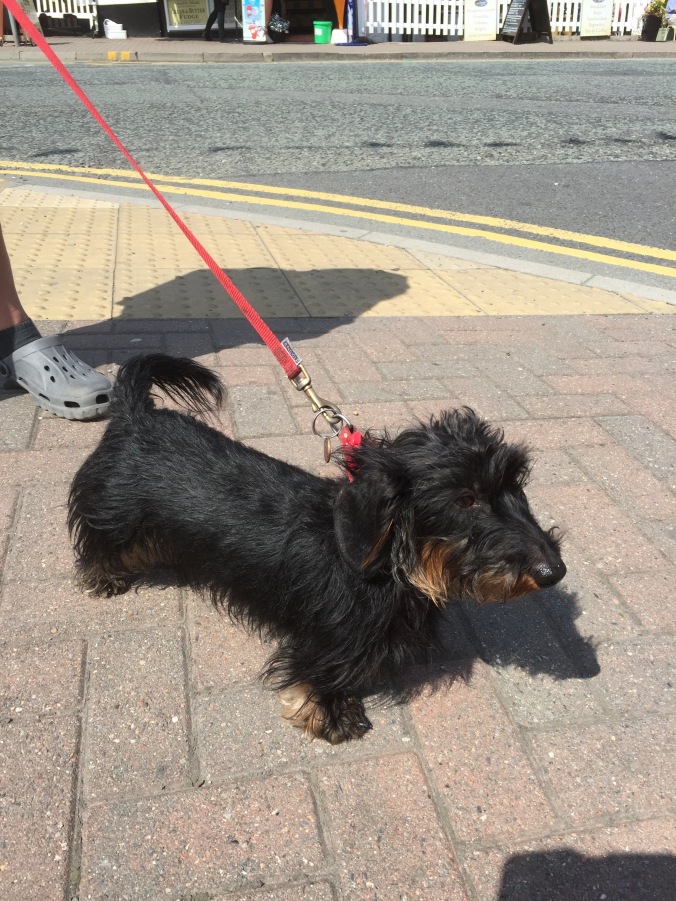 Here’s Milly in Wales. I was missing Poppy and Jeff so much while I was away and when I saw this puppy I had to stop and have a pat and a chat. When I found out that this ‘puppy’ was actually 4 years old – I knew I had to have one.

Like all of us on our FI/RE journey, I put a strategic plan in place, researching through my contacts in the Aussie dog world to find out who was the best breeder in England for miniature wire-haired dachshunds, (turned out it was Milly’s breeder, which was nice), then emailing her and asking if she’d exported any stock to Australia. It helped that I’d once owned a Cavalier that one of her best friends had bred, back in the day. She put me in touch with a breeder in Queensland and, 18 months later:

Success! Scout flew down to join us.

Things like this give me hope that my plotting and planning to reach FI/RE will move equally well. That 18-month wait for the breeder to have a litter with a girl that suited us seemed like a long wait at the time, but looking back? It went like a flash.

I suppose the secret is to set big, lofty goals and then enjoy the smaller milestones and surprises along the way. I’ll close with my win from last night – I’ve been waiting for what seems like weeks for both of the boys to be away from home for dinner, so I could make myself a ‘fakeaway’ dinner of frozen chicken schnitzel and chips.

I know, I know, it looks disgusting as it goes into the oven. It didn’t look that much healthier coming out, either. But I was chuckling. I’d hidden those packets away in the freezer in the veggie section and neither of the boys had found it. Success!

Enjoy the journey and celebrate the small wins – even ones as small and as selfish as this one. The journeys we’re all taking to our lofty goals of freedom may seem as if they will never end, but I have faith that when we turn around and realise we’ve succeeded, it’ll seem like it took no time at all.

No one knows better than Maths Guy.

How I choose to spend my grocery money to get more bang for my buck..