Lessons from Literature 5: The World According to Garp. 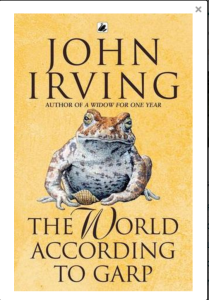 This was the novel that brought John Irving into the limelight. I first became aware of this story when I saw the movie – my first movie with John Lithgow. One of my favourite actors.

The World According to Garp, written in 1978,  is a quirky novel, with characters and situations that are still memorable today. Jenny Fields is a single mother who gets pregnant with her son, TS Garp, under very unusual circumstances. The novel follows Garp through his life, from his childhood with his incredibly independent mother, through to his marriage with Helen and his life with her and their kids.

Garp chooses to be a writer, a SAHD while his wife is proud to go to work and be the major breadwinner. They chose their partners in life well… always a good thing to do to succeed both financially and in life. She was an English professor who had no ambition to be a writer – she liked to read – whereas all Garp wanted to do was to be a writer. Choosing a partner in life whose ambitions dovetail in with your own is one of the best ways to get ahead.

In other words, enjoy the journey, not just the destination. So many people appear to discover FIRE, get excited and then put all their energies into investing, retirement funds and getting out of debt while forgetting to take some time to smell the roses along the way. Both Garp and Jenny Fields lived life according to their own terms, particularly Jenny.

What a great way to say that you should make sure to live while you’re alive.

Here’s the quote that matches up with the clip from the film. See opportunity when it presents itself to you and act upon it!

The small things. Plus a plea for your help! :)