In defence of Santa – from a Value-ist. 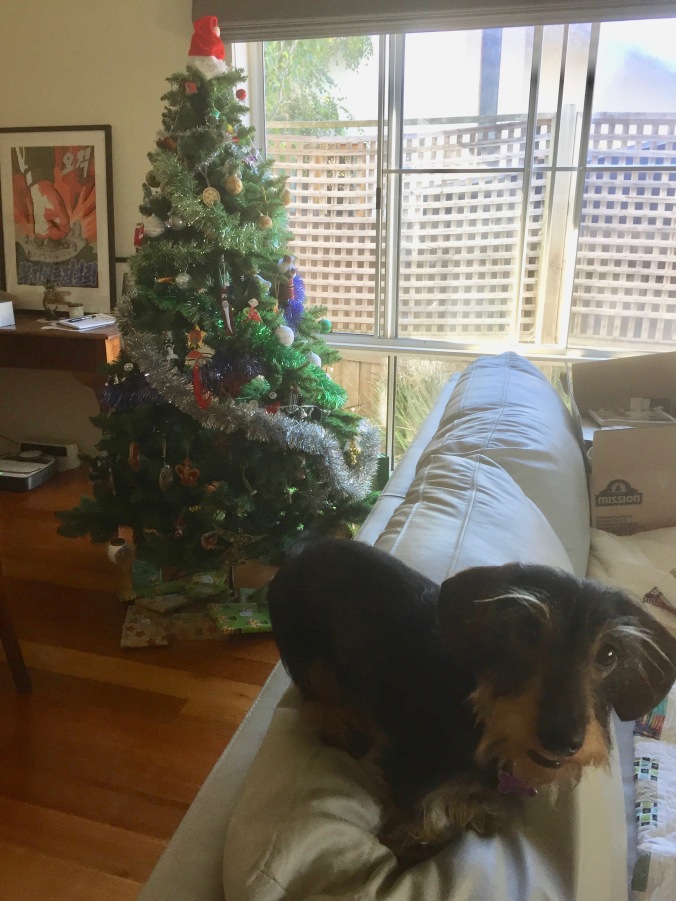 I read a tweet from Angela an hour ago about how her family doesn’t “do” Santa at Christmas and as a Santa enthusiast, it got me thinking and remembering. Angela and her family have thought about this and haven’t made their decision lightly, but I have a differing point of view. Christmases here are very different now, but when the boys were kids and money was tight, it was a challenge to make Christmas morning magical. And, as I’ll tell you in a second, yesterday I discovered that it paid off big time.

As a single parent, when the boys were small, money was tight. I went back to full-time work when the boys were Tom10, David8, Ryan6 and Evan5. When I was on the sole parents’ pension as it was called then, I was paying a mortgage and the bills and we were living pretty much hand-to-mouth. We were on roughly 18K/year, of which nearly half was going to the mortgage, so there was little room for fripperies in the budget.

But… I’m a Value-ist. I was a Value-ist before the term was coined. I’ll scrimp and scrape to save money for my family to survive, but if there is something that I see adds huge value to our lives, I’ll spend the money to achieve it.

Santa was definitely one of those things.

When Tom26 was Tom9, he came home from school in the middle of the year and said to me, “Joe Lunchbucket said to me that Santa wasn’t real.” Now, Tom is a communicative boy, so I hastily got him away from his brothers by suggesting we go into the backyard for a chat.

We walked down to the fig tree, where I asked him whether he really wanted to know. He said yes. I looked him right in the eye, smiled and said, “That’s right. I’m Santa.”

Tom9 gasped and said, “NO WAY!” To be frank, I wasn’t expecting this reaction.

I laughed and said, “What do you mean?”

After convincing him that yes, I was indeed Santa, he became struck with guilt.

“Oh no. I’ve been telling all the boys to ask for the expensive things for Christmas so you wouldn’t have to get them.”

Oh, my baby. That’s real love right there. And fiscal responsibility. No wonder he became an accountant! That remark went straight to my heart. I laughed, hugged him and we had The Talk. The Talk about how knowing about Santa means that you’re now with the grown-ups and we NEVER spoil Santa for little kids by blabbing it out just to make ourselves feel important. We keep the secret so they get to enjoy it just as we did.

Having all of your children caught up in the magic of Santa is special. But it’s also special when your older ones start joining in with keeping the magic alive for the little ones.  When they help the little ones with the spelling on their Santa lists, when they distract them when we’re shopping so I can smuggle a present past them, and when they all yell out, “Thank you Santa Claus!!” and the older one/s turn and smile with you, or give you a secret hug and whisper, “Thanks Mum.”

To be honest, I had an advantage on my side, in that the boys were little when money was ultra-tight. This meant that I was able to get away with quantity over quality. I knew that little kids have no idea what things cost. They just get excited by piles of things. So every year each boy would get one “big” present. Something that they wanted that was ultra-fun or ultra-pricey that they needed AND wanted. Then there’d be a present or two that was medium exciting, like computer games (often bought second-hand) or smaller toys. The rest required ingenuity.

But the biggest savings hack was shopping at garage sales. The little presents, and to be honest, some of the really big ones too, were bought here. The boys were away with their father every second weekend, so from about September onwards I’d drive around and visit garage sales when the kids weren’t with me. People just want to get rid of things their kids have outgrown, so I’d pick up toys and other things for absolute pennies on the dollar that they would have been when new.  My kids never had any idea that a huge percentage of their Santa gifts were pre-loved.

All that mattered to them was the magic.

Yesterday I listened to a podcast that Tom26 was on. He and a friend were talking about all things Christmas – the carols, the commercialism, the memories and, of course, Santa. Tom26 brought up the Santa reveal story I’ve already shared with you, but he also said this:

“As a young kid, Christmas is everything. And the one thing I’ll say about my mother who, I think, will end up hearing this episode…”

“Tread carefully!!!” said his friend. (Made me laugh.)

“… My family did not grow up with any sort of money. We were really, like, dirt poor. But Christmas – Mum went above and beyond. At the time, you’re young, you don’t know, but you look back and you realise what she did. And that’s something that I cherish, looking back on.”

“Then as you get older, as you get busier, it’s about taking a break, saying, “I’m going to put all my problems away for a second, put them in a box, and go and see friends and family. The people that matter most. And they don’t have to believe, either, (they’d touched on religion in the conversation earlier). We can just say thanks for one another on one day. The gifts really are a symbol of thanks, really, for just putting up with me (laughs), well, maybe not entirely! But also thanks for being YOU, through the thick and thin.”

The good thing about podcasts is that you can go through and get it down, word for word. I really wanted to be accurate in putting down what he said because I was so blown away with how perfectly he’s internalised the true meaning of Christmas. Family and friends – the people closest to you. The gifts you buy are only there as a symbol of how much you value those people in your life. Taking time out to be with them and acknowledging them and their importance to you.

I believe Santa lays the groundwork for this.

Then they learn how to give.

Merry Christmas everyone! May your holiday season be happy and mirthful and your dinner plate always be full.  🙂