Frugal Friday: What can you scavenge from your job?

I work at a large suburban secondary school in Melbourne, Australia. Schools are funny beasts – they’re a glorious mix of theory and practice, with all sorts of materials and resources on offer to satisfy the requirements of teaching over 2,000 hormonally-challenged humans the skills to survive and thrive in the real world.

We have subjects ranging from English and Maths to Dance, Food Technology, (ie: cooking), Outdoor Ed and Studio Arts. We have kids scampering around making films in Media Studies, putting on productions in Theatre Studies and poring over computers creating games and other programs in I.T.

Obviously, not every workplace will have the little bonuses that mine does, but it doesn’t hurt to step outside the box and think about how you, as a legit worker in your place of work, can engineer a win.

When I say this, I don’t mean things like stealing office supplies!! Here where I work, the school already gives teachers all that we need, so there’s no point smuggling out pens and paper clips – when we run out we just order some more. It’s not an issue. Photocopying is all free – you just punch in the code of your department and you’re good to go. Handy when you need a new passport, etc.

But how about things like food waste? I’ve just begun my veggie garden again and the soil isn’t good. I need lots of compost to improve it. I could drive to Bunnings and load up the car with bags of compost at $15 each or…

… I could have a brilliant idea instead.

I chose the latter.

I’m an absolute genius. Look at the staffroom compost bin at the end of my desk.

My brilliant idea began with this. Most teachers are idealistic hippies at heart. You have to be if you expect to last more than a few years at this job! I printed up a list of what couldn’t go into the compost, walked across to the library and had Anna laminate the page, then I set it up. Every day I line it with pages from the staff newspapers that I collect at the end of the day from the common room, once everyone has finished reading them.

People love it. They laugh at how excited I get when another apple core or banana peel is dropped in and they like feeling that their food waste is actually going to be put back into the food chain, not just being left to rot and create methane gas in landfill. There’s even one teacher who loves the idea so much, she brings in her food scraps from home. She lives in a flat so she can’t have a garden.

This set-up was going for about a week when I thought of the Food Tech kitchen just down the hall. They have cooking classes in there all the time. Maybe I could get them to put a compost bin in there for me?

The kitchen staff were SO enthusiastic. They told me to bring in a little bin that could sit on the countertop and the kids could drop the scraps in. Then came the game-changer:

“Why don’t you go down to the canteen and ask them if they’d put a bin in there for you?”

OMG. That canteen serves hundreds of kids and teachers a day. Imagine the scraps?!? Imagine the compost?!? Imagine the food I could grow?!? I ran down there as fast as my portly frame could carry me. 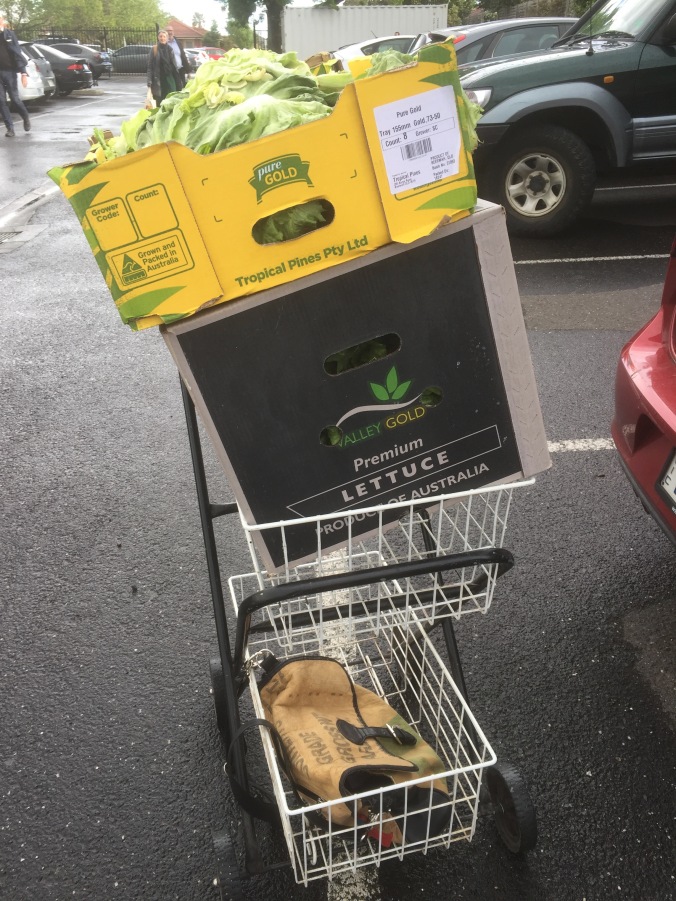 The woman who runs the canteen is Just Like Me. She’s making a food forest at her house, she has bees, she even has a few horses who live out in the country somewhere. She was rapt at the thought of turning the food scraps into Something Useful. We bonded over talk of harvests, home-made honey, horse poo and the like. I now have a 20-litre bin in the canteen kitchen and I take the contents home twice a week.

The Food Tech teacher has my year 7 English class. When she told them that the compost bin was for Ms Frogdancer Jones, she said that they were so excited to be putting their eggshells and scraps in. Teachers love getting gifts of love from their students. Usually, I prefer wine, but this is great too. 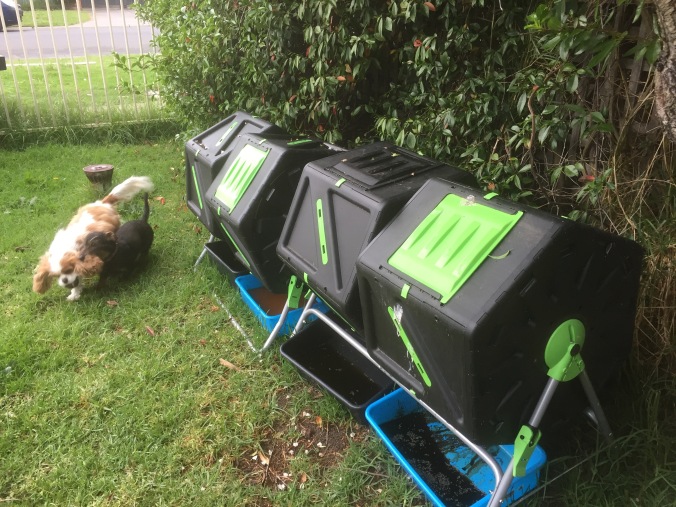 I’ve had to buy another compost bin to accommodate all the scraps!

I know a guy who works in an office in the middle of the CBD. He collects coffee grounds from his office kitchen, plus from a café that he stops into on his way to work every morning. He takes them home and uses them in his garden and worm farms. Over time, he’s fertilised his entire garden for free.

I also have access to a library, where the staff love to buy books. Naturally, they buy lots of Young Adult books for the kids, but they also buy books for adults and they’re happy to take requests from teachers. I still buy some kindle books, but only a couple of times a year. I just wander through the library shelves or borrow from their Kindle books, which is even better. Having access to this place has saved me hundreds of dollars each year. 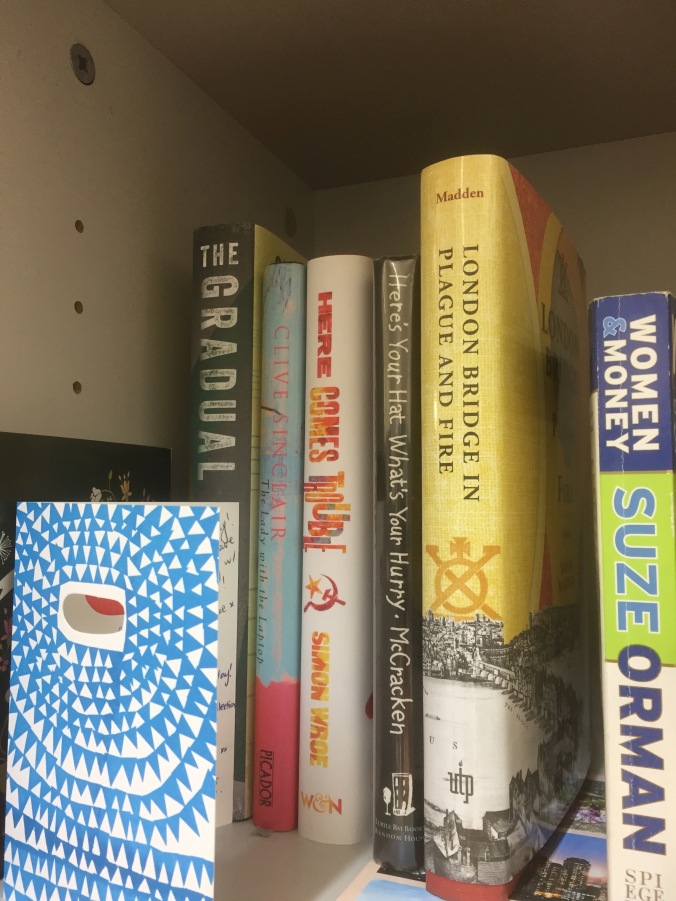 It’s not just the library. People here love to read and they’re silly enough to buy their own books. Especially the English teachers. Every now and then people cull their bookshelves and bring them in. Once I finish these, I’ll pop them out for someone else to read. The (reading) circle of life… 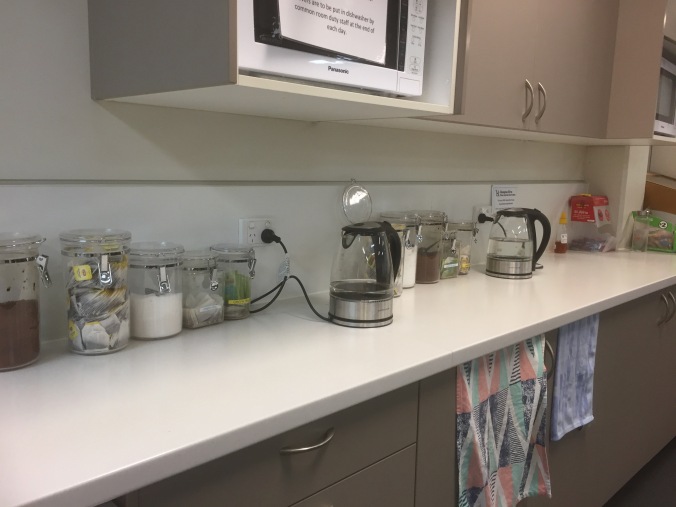 When our principal took over, she introduced free tea and coffee. We had a speaker come and talk to the staff about well-being a few years ago and she mentioned that green tea is really good for serotonin levels, so ever since then, we’ve had green teabags as an alternative as well. I like the green tea with mint. It takes the edge off the whole lawn clipping taste. We have plunger coffee ready and waiting for us every recess – the aroma when we walk into the common room after class is amazing.

Yet some people on staff still go out for coffee instead of using what’s already provided. I just don’t get it… 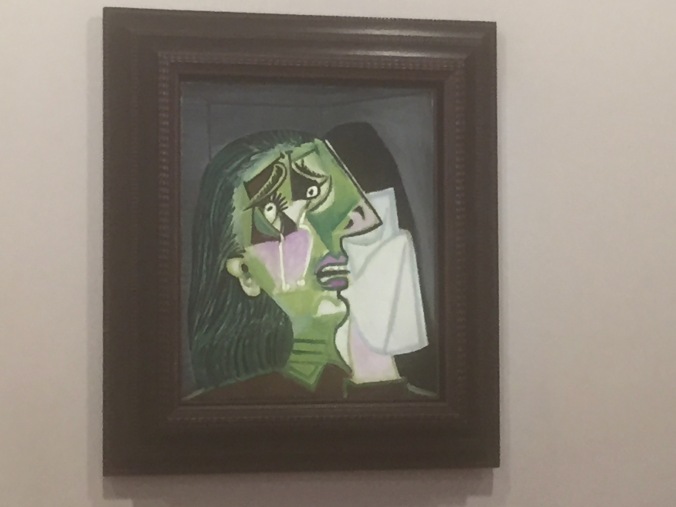 Over the years I’ve been to so many theatrical productions through the school, due to my Drama classes. It’s awesome. The kids have to see a play as part of the course, so I look at what’s on, then book the one that I want to see. It’s a sacrifice, but I steel myself every semester.

But I’ve also been on so many other excursions, due to the fact that there’s student: teacher ratios that have to be met for safety reasons. So I’ve been lots of different trips to the zoo with the year 7 Science classes, to the Werribee sewage farm, (for some reason I only went once- once was enough), various beach and city walks for Geography, Art exhibitions at the NGV for year 7 Eng/Art… the list goes on.

The photo above was taken when the NGV art staff let me into the Van Gogh exhibition in the back door not once, but twice, when I was taking kids to the Art Gallery on 2 separate days. How amazing was that? I queued for an hour to get into the Van Gogh museum in Amsterdam and I loved it, but somehow these snatched viewings were sweeter. Love a freebie!

The more active teachers get to tag along on surf camps, ski trips and hiking with the Outdoor Ed kids, while there’s always a sporting team needing a coach. When they’re playing another school, those teachers get to escape the campus and get out into the fresh air and help kids sport their little brains out. Sounds like hell to me, but still – other teachers love it.

Camps, both in Australia and overseas. Anyone like to travel?

Every year level goes on at least one camp a year, with subjects such as French, German and Music going on extra trips. There’s a French and German exchange every year, with teachers ferrying the kids across to Europe and staying with them for the month. The year 10 French kids also go to New Caledonia, which is a little closer to home. The music kids have been to Iceland, the US (two of my boys went on this one), China and Cuba, as well as tours of regional Australia, all with teachers going along with them.

I was toying with the idea of volunteering for the year 10 Central Australia trip next year, which is (I think) a 10-day bus trip with around 60 kids, where they see Coober Pedy (an opal mining town where people live and work underground), Uluru, Alice Springs etc. It’d be a cheap way to see a part of the country that’s normally very expensive to get to, but then again – this year’s year 9s aren’t really my favourite year level. I have 2 classes of them and … meh. Maybe I should wait for a more congenial year level and go with them? Ten days is a long time to be stuck on a bus with a group of kids who are a P.I.A…

The Antipodean trip is a huge one. Year 11 kids have to fundraise the money for their own tickets, then they go to a place like Africa, Vietnam, Nepal etc and do things like help build schoolrooms or buildings for orphanages and things like that. They get to travel as tourists and see the country too – and guess who gets to go with them? Of course, there’s a lot of responsibility that goes along with taking kids overseas, but these teachers get to see parts of the world that usually cost an arm and a leg to get to. You should see the photos that they post on Facebook while they’re away!

When I stay back at school while other teachers are off risking life and limb on football fields, trekking in Nepal or teaching kids how to surf, there’s still things happening on campus. I learned how to do Bollywood dancing when the year 7s had an incursion – I would never have tried that if I wasn’t with them! We have music concerts and theatre companies that come to the school – ‘Romeo and Juliet’, anyone?

We also have speakers who come to talk to the students – I’ve heard authors share how they ended up writing for a living, a survivor of the Holocaust sharing his story of survival, a famous AFL coach giving motivational speeches every year to the year 12s – even a man whose grandmother was born a slave in the US who came to talk to the year 10s about ‘To Kill A Mockingbird.’

A few years ago we had James Randi from the American Skeptical Society come and demonstrate things like psychic surgery to our kids, in order to get them to think critically about things and not just blindly follow whatever tripe charlatans dish out to them. Political lecturers from Monash University come and explain things to the kids when interesting things happen, such as when our previous Prime Minister was unceremoniously dumped a few weeks ago.

Teachers can pop along to these lectures and classes, providing they don’t have to be in front of their own class at the time. But most of them are at lunchtimes, so it’s all good.

This is a rundown of the opportunities I’ve noticed at my workplace where people can use resources by simply noticing what’s lying around, ready for the taking. Some are good for the planet and save money; others are opening up to experiences that people might not otherwise get to do.

Obviously, not every business has these exact opportunities lying there, ready for the taking. But you have to ask yourself: “What might I be able to do at my workplace?”