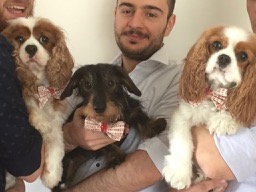 Poppy and Jeff are Cavalier King Charles Spaniels, a breed originating from England where the climate is a tad colder than in Australia. Cavaliers have a proud royal history, dating back to the 1600’s when the Stuarts ruled England and were obsessed with their little spaniels. 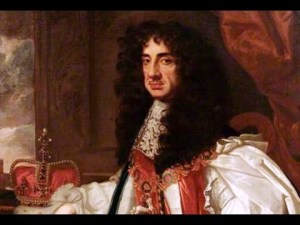 Here’s a portrait of Charles II, who gave his name to the breed. Notice his long, luxuriant wig, so like the dogs’ ears? All of that hair, whether from wiggery or from natural means, is all very well in a climate where Santa Claus lives and something called snow happens. But here in Australia? Not so good.

Back in the days before children, when I bred and showed this breed, a long coat on a show dog was ideal. I’d brush them every day with a boar-bristle brush, wash them and condition them with almond oil to look after the shine and softness of the coat, and if their coats almost hit the ground you were the envy of all beholders. It’s against the breed standard to trim the coat, so the only time scissors went anywhere near my dogs was if I had to cut a knot or grass seed out. However, the Frogdancer home has moved on and so has my love for long locks on dogs.

Jeffrey, (the one on the left of the photo), absolutely drips with coat if he was left to his own devices. He’d survive perfectly happily for days in a blizzard if he had to. Great in the winter time, but on days where the mercury reaches 35C+/95F+, he suffers. The hair that he leaves around the house is insane, to the point where Dobby, my Roomba, gives up in disgust and goes back to his charging station to sulk. There’s no need for Jeff to have the coat, so for the last 3 years, I’ve been getting my sister Kate to clipper him.

She has mini schnauzers, so she clippers her dogs quite often. About 4 times a year I load my dogs in the car and we go down to her place and she attacks Jeff while the other dogs watch. 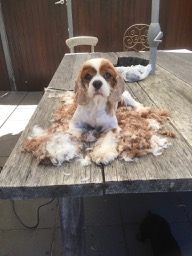 Look at the hair that came from him yesterday! The last time he was clipped was in the beginning of November, and this was the growth from then till now. Kate suggested that I take up spinning and make yarn to knit a jumper from all of the hair. 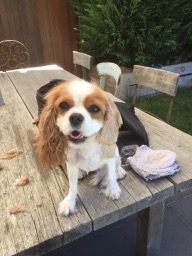 In this photo, you can see how long Poppy’s ears were before one was shaved. After she was spayed her coat changed and became thicker and drier, so now I just get Kate to clipper her too.

What does this cost? The last time Kate said she needed a new set of clippers, I offered to go half if she’d groom my dogs when they needed it. She agreed and I gave her $50. This was about 18 months ago.

Before I started writing this post, I googled the cost of clipping a small breed like the Cavalier if I went to a grooming salon. I nearly fell over. Maybe I would have if I wasn’t already sitting down…

That’s a lot of money. I think I’ll offer to pay for the next set of clippers myself. I had no idea it cost as much as that. I’m feeling guilty now about asking Kate to pay for half the last time, considering she does all the labour. Clearly, I’m a bad sister.

Anyway, let’s do some Maths. Assuming I spent in the middle of those horrendously large figures each year, that works out to $640/year. Jeff recently went to the vet and had 10 teeth removed at a cost of $590. Essentially, getting my sister to do their grooming has covered the cost of that operation. Gotta be happy with that! 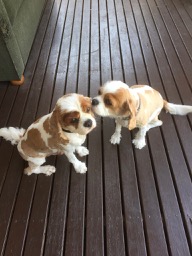 To be honest though, I’d be even happier if the short hair enhanced their appearance. Sadly, it has the opposite effect. Until a little more coat grows, their heads look too big for their bodies, their legs look like spiders’ legs and when they lie down on the floor they look like cowskin rugs. 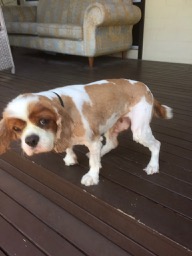 Add gangly, ungainly and gawky to that. That short coat isn’t doing him any favours in the looks department. 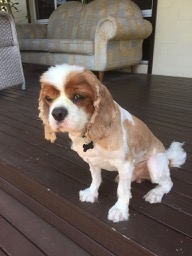 Now you can tell that he realises we’re mocking him. He’s putting all his energy towards willing that coat to grow…

So the cumulative cost of insourcing the dog grooming adds up over time to be a significant amount of money.

However, this little thing of sharing the cost of the clippers is also pretty powerful. When you stop and think about it, why don’t we share the cost and the use of items that only get used every now and then? A group of neighbours could share a lawn mower and a mulcher, for example. Why does every house have a ladder? I can’t remember the last time I needed to use ours. Even kitchen things like dehydrators and preserving kits could be shared among friends. Obviously you’d have to work out what would happen with breakages etc, but I’m sure there’d be a way around it.

The single woman’s track to FI.