Frugal Friday: How I spent 2 hours today getting the most bang for my grocery bucks. 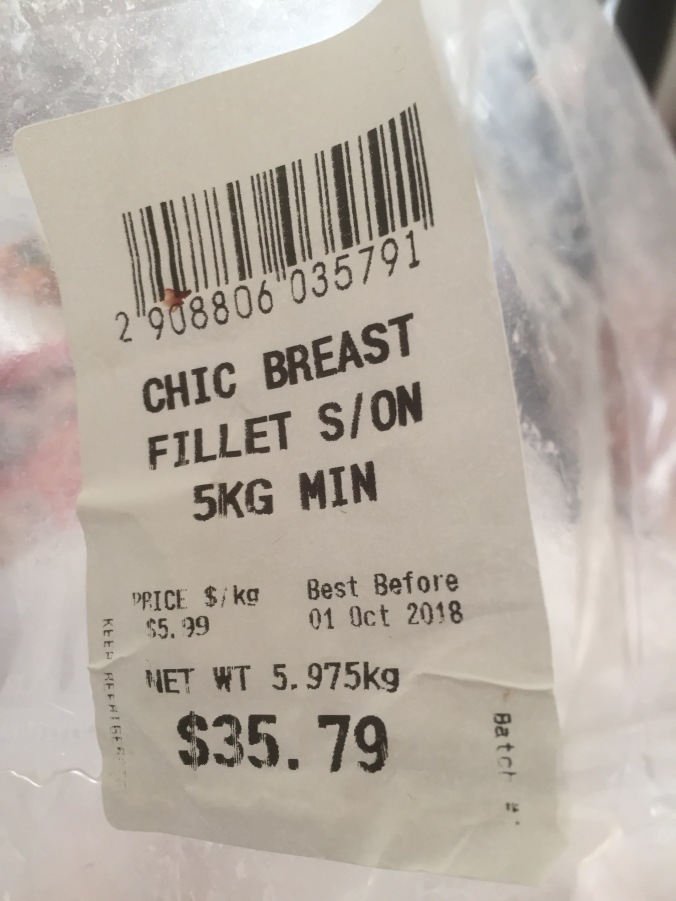 There’s a chicken warehouse about a km away from my place, where I go to buy the chook necks for the dogs’ breakfasts. They have fantastic bulk deals in meat, so every holidays I go there and buy a bag or two of either breast, thighs or drumsticks and spend some time parcelling them up to use in the upcoming term. This time I couldn’t go past chicken breasts at $6/kilo. So cheap!

If I’d bought the “skin off” version I’d be paying $2/kilo more. But why on earth would I go that when I have dogs? Tonight, instead of their meat patty and dry food dinner with some yoghurt, I’ll replace the patty with the chicken skins. They’ll be in ecstasy and it’ll cost me nothing.

As I was cooking and chopping and measuring, I thought I’d do a ‘Frugal Friday’ post about everything I was doing today in the kitchen between 10AM and 12PM to save money and make everything stretch a little bit further. 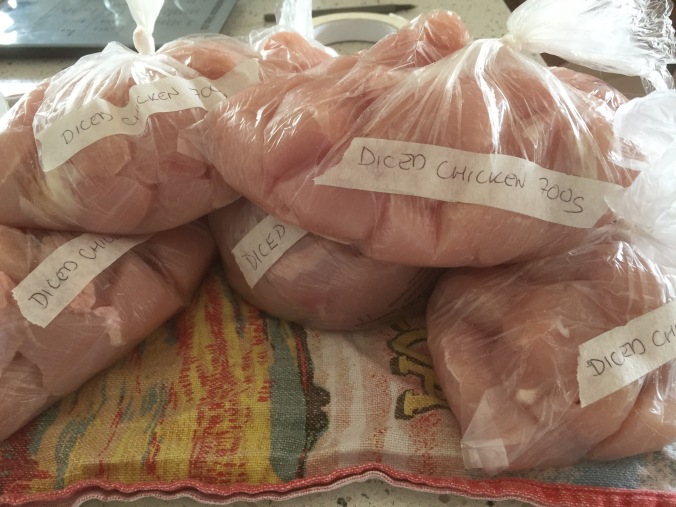 Most of the bag of chicken went into these packaged-up portions. I use Skinnymixers recipes a lot and she tends to have the protein in 700g lots, so that’s what I’ve packaged them in.

I label all my freezer things with masking tape and a pen. Works like a charm. I decided to do this after the day I was running late for work and didn’t have time to make a salad for lunch, so I grabbed what I thought was one of my Emergency Lunches from the freezer. Imagine my dismay at lunchtime when I opened it to find a couple of uncooked drumsticks in some marinade instead of the Butter Chicken I was expecting…

So far I had 6 meals’ worth of chicken to feed 3 adults and have at least one or two lunches left over with each meal. Not a bad start… 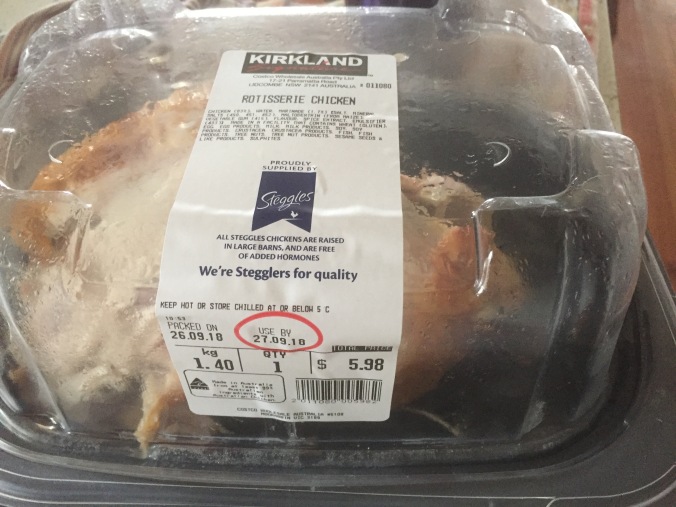 While I was doing this, I had 2 Costco chickens on the stove, making stock. I’d been to Costco a couple of days before and I picked up two chooks. At $6 a pop, how can you walk past them? We’d had a couple of dinners and lunches from them, so today I put the carcasses and the leftover meat into a saucepan of water, brought them to the boil and then simmered them for a couple of hours. I read somewhere that if you add a dash of vinegar to the water it helps draw out the calcium from the bones. I have no idea if this is scientifically valid or not, but I do it just in case. 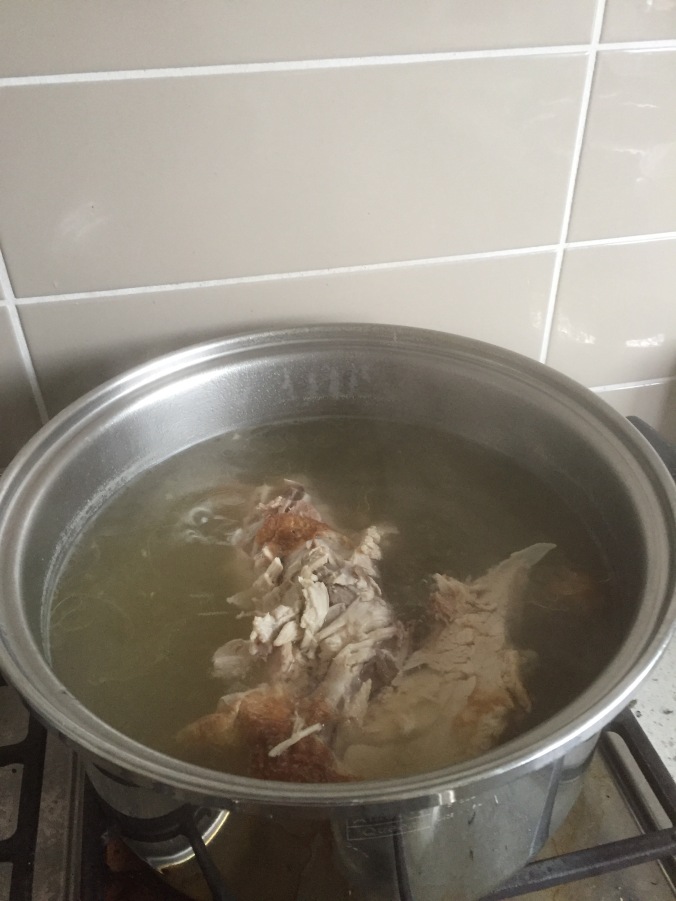 This is real ‘set and forget’ stuff. I can get 3 or 4 soup bases out of each chicken. It just burbles away on the stove while I’m busy doing other stuff. 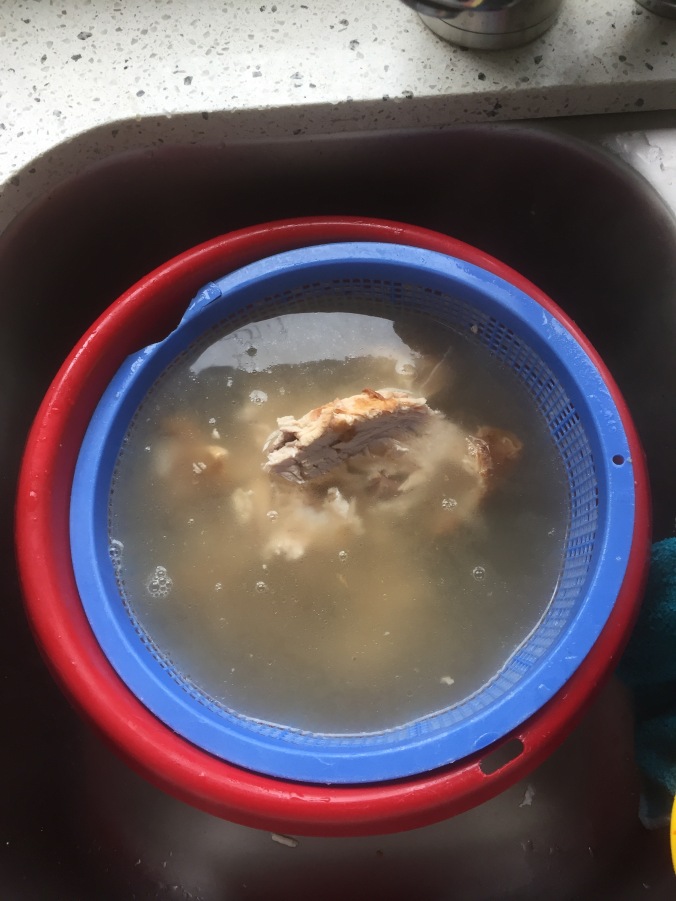 Once it’s done, you drain the bones and meat from the stock.

DON’T do what I did once – I cleverly put the colander in the sink and poured the stock and carcass into it – only to watch all my precious stock go merrily down the drain. 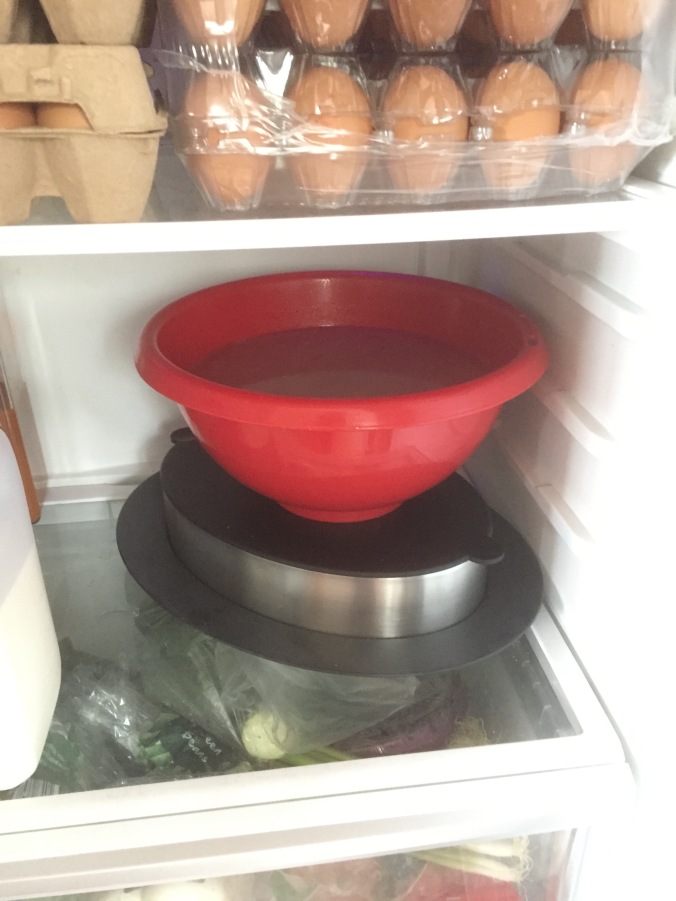 Once the stock cooled a bit on the bench, I popped it in the fridge to get cold. Later, I’ll skim any fat from the surface and pour it into plastic containers to freeze. Nearly every Saturday we have soup for lunch, using up any sad veggies, leftover pasta or rice and things like that. I flavour it with chicken stock paste, or tomato paste, and throw in beans I’ve cooked from scratch and frozen – anything that will be tasty and that I need to use up. 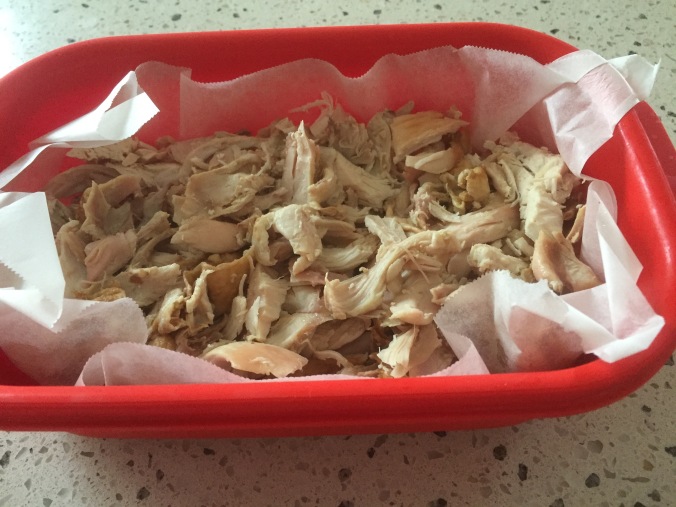 Here’s the meat I saved from one of the carcasses. I’ll probably get 2 soups’ worth of meat from this. I like to freeze them in shallow containers lined with baking paper, so when I take it out to use them I can lift it out of the container and snap off how much I think I’ll need. It’s crazy how much food is left on a leftover chicken that would normally have been thrown in the bin. 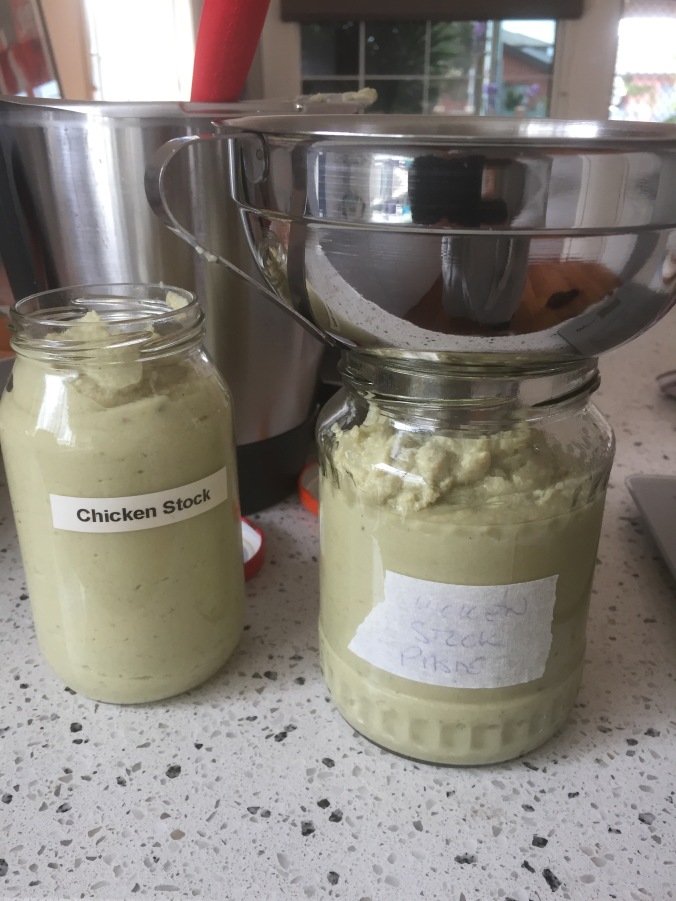 I mentioned the chicken stock paste that I make. I had some vegetable stock paste still in the fridge, but I’d run out of the chicken stock paste. Making it yourself is so much tastier and healthier than using stock cubes. You can definitely taste the difference. So I used one of the breasts in the bag of chicken to make some stock paste, while another 700g of meat was used to cook dinner for tonight – a Chicken Tikka Masala. I had both thermomixes cooking this up while I was busy chopping the rest of the bag of chicken into the portions you’ve already seen.

I’d call this stock paste ‘Liquid Gold’ if it was a liquid! It has a heap of salt in it, which is the preservative, and it lasts in the fridge for weeks. I’ll put one jar in the fridge and the other in the freezer and I’ll be right for Chicken Stock paste for the next 6 months or so. 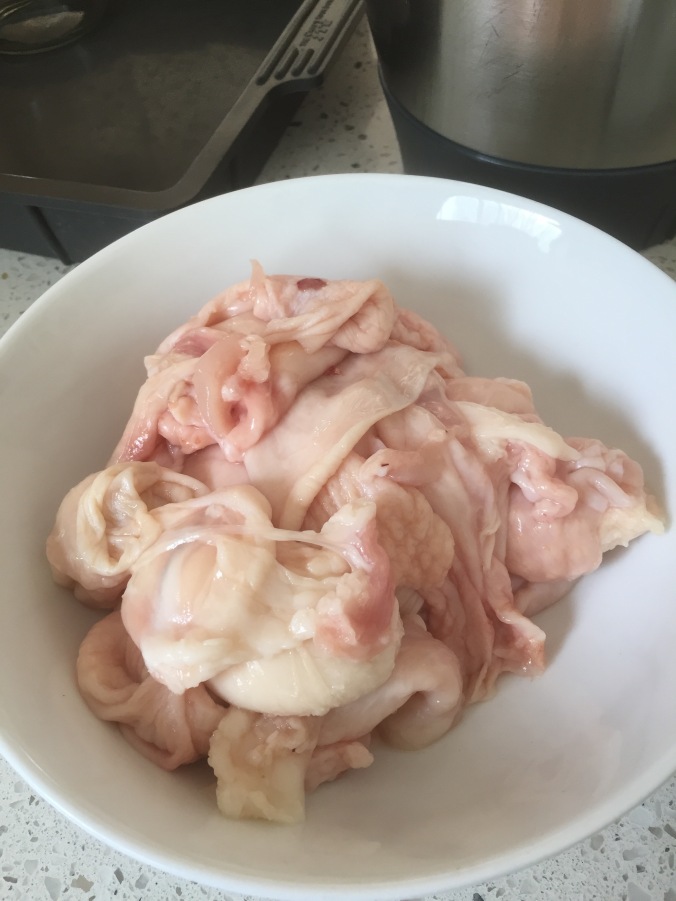 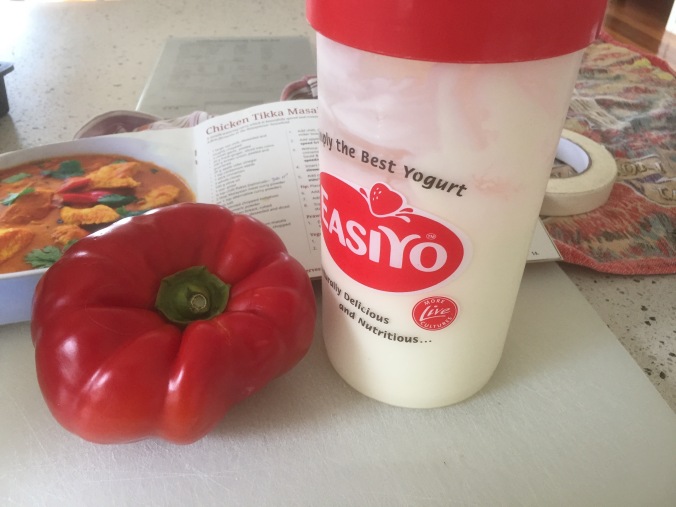 The recipe for the Chicken Tikka Masala calls for 70g cream, but I always use the yoghurt I make myself. I use an old Easiyo container to store it in, but I make it in the thermomix for around $1/litre.

This capsicum was soon chopped up and thrown into the bowl, but have a look at what I’ve got planned to save money here in the future: 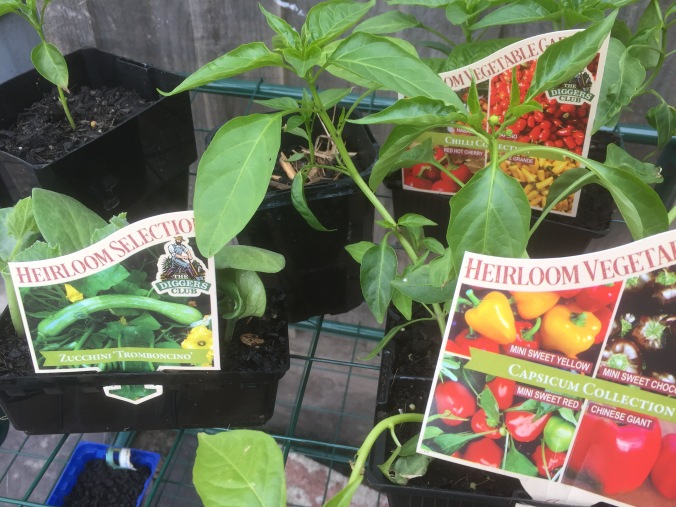 Here’s a sneak peek at the mini greenhouse I’ve got. Once the garden gets going, hopefully I’ll have lots of produce chopped up and frozen to use throughout the year. AND all of these plants are heirloom vegetables, meaning that I can save their seed for next year and I’ll never have to buy seeds or plants again. 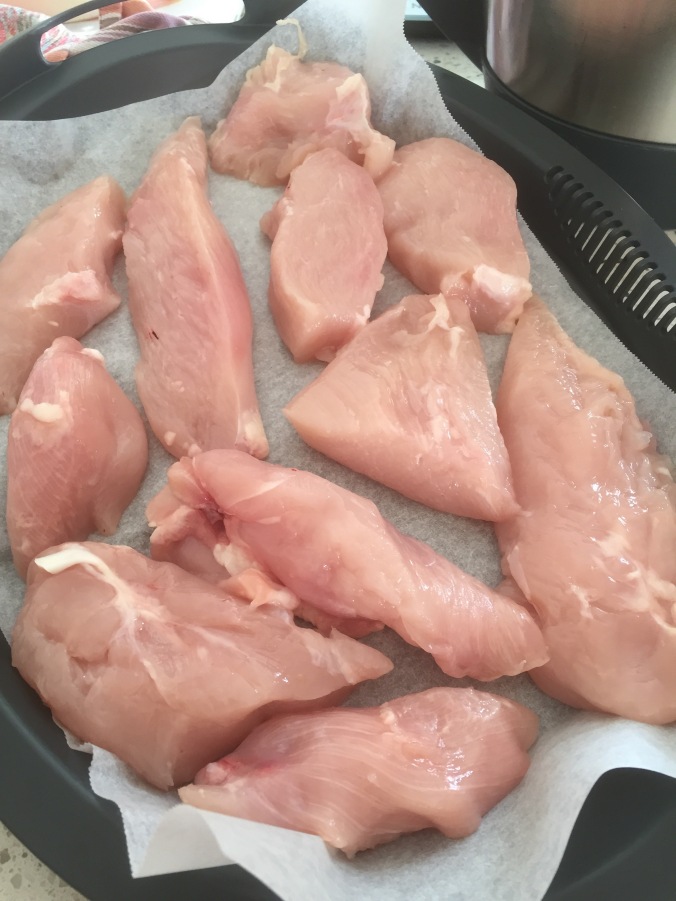 The bag of chicken breasts wasn’t finished yet! Now that Spring is here, I like to take salads, rather than cooked lunches, to work. I decided to steam the last couple of breasts so that I could shred them and use them as protein in my salads or on pizzas. 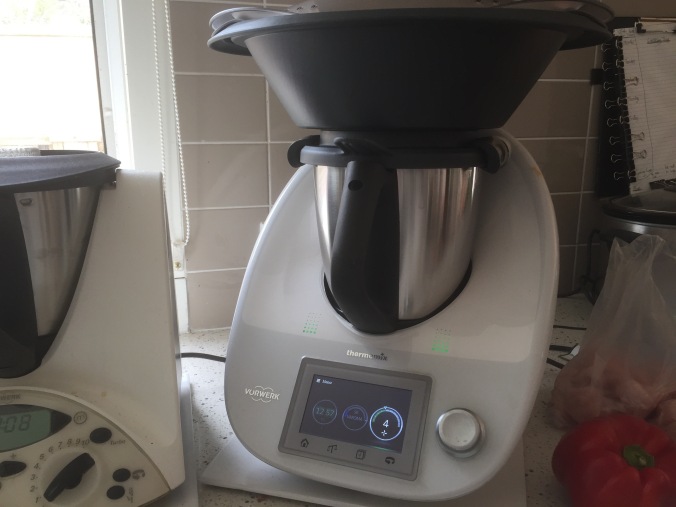 Here’s a shot of the Chicken Tikka Masala cooking on the left, while the steamed chicken pieces are cooking on the right. Meanwhile, the second Costco chook is bubbling away on the stove behind me and I’m stacking the dishwasher. I have a podcast on my iPad and it’s all happening! 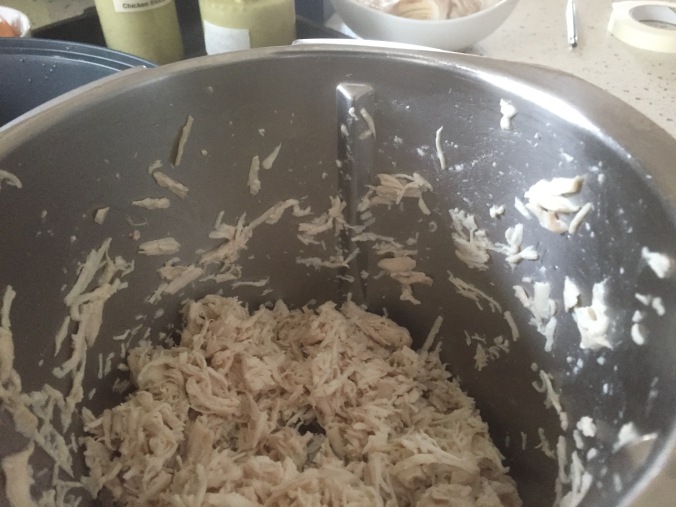 Once the chicken was steamed and then shredded, I portioned it up into small handfuls. 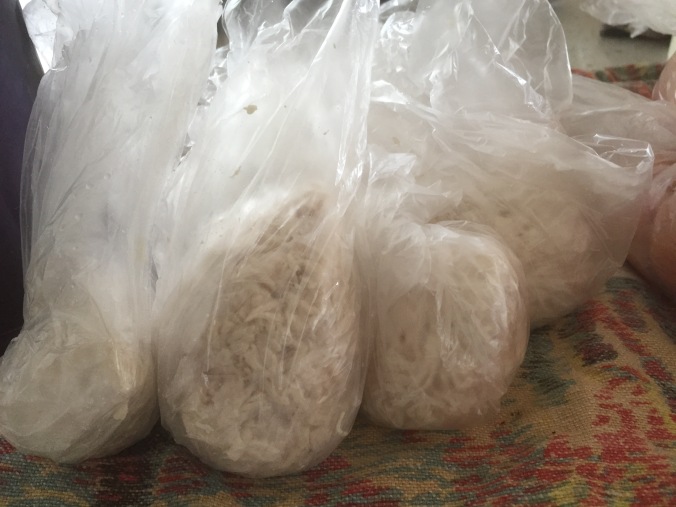 9 single-serve meals’ worth of protein here, either for salads or pizzas. This is making me feel all warm and fuzzy – I love having meals prepared for Future Frogdancer and the boys. 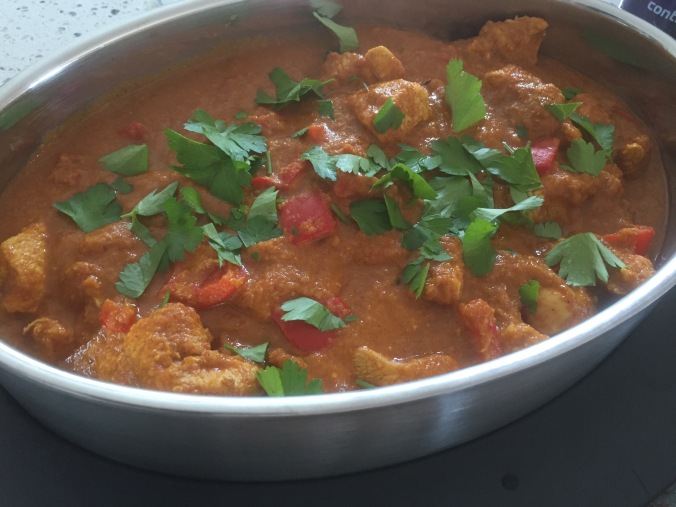 Speaking of preparing meals – here’s dinner. I’ll just have to cook some rice and then the boys and I can help ourselves. There’ll be enough leftovers to freeze for an Emergency Lunch or two as well. 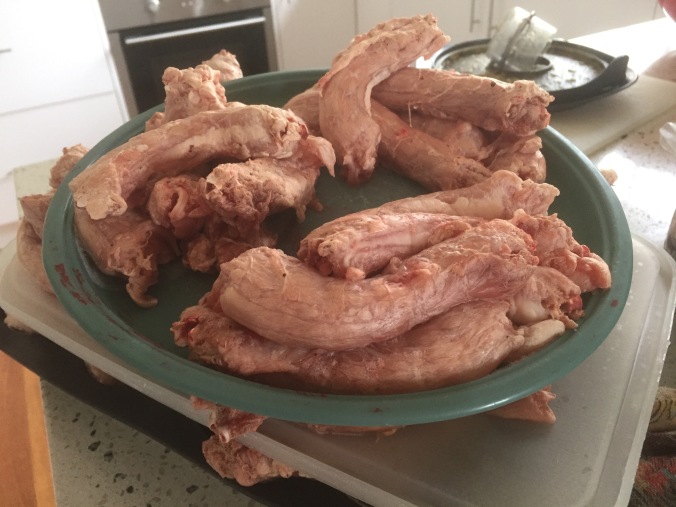 While all of this was going on, I was bagging up the chicken necks that I’d put into piles of 5 and flash-frozen. Each pile is enough for breakfast for the dogs. All I have to do is remember to grab one at night when I feed them, so by morning, they’ll be defrosted. (The chicken necks, not the dogs.) 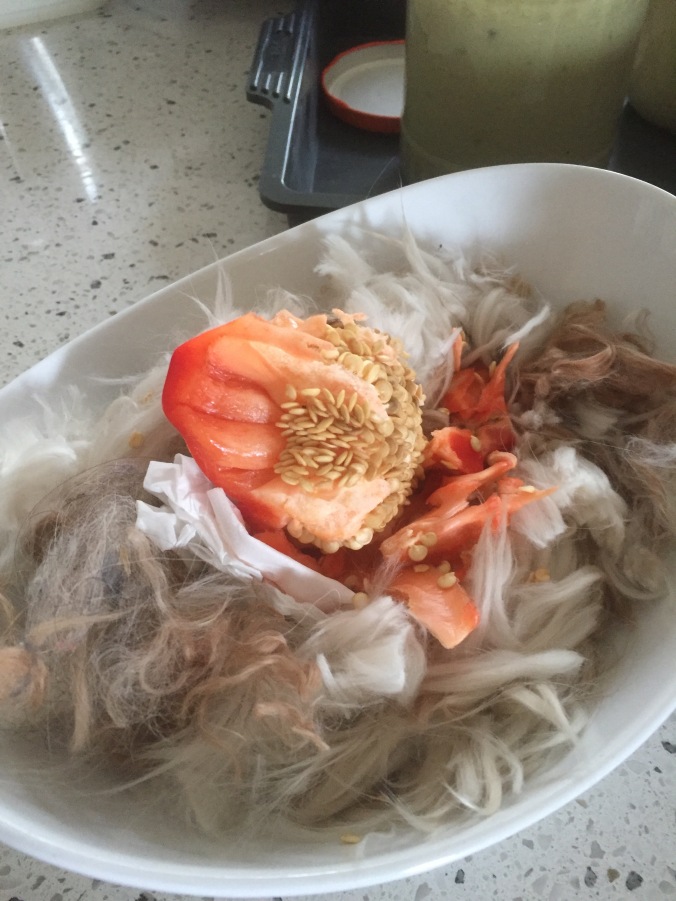 And finally, all of the veggie scraps and the dog hair that Ryan23 cut from the Cavaliers yesterday was put into the compost, so that one day it’ll all be recycled into feeding the plants that will then feed us. Apparently, hair adds nitrogen to the soil. Who knew?

For around 2 hours in the kitchen, pottering around and listening to podcasts, I’ve organised around 20+ meals for us. The main cost was for the chicken, with the bag of chicken costing $36 and the 2 Costco chickens costing $12. (But we’d already had 3 or 4 meals from those Costco chickens…)

Anyway, it’s impossible to calculate how many actual servings this will all produce. My boys are adults and they are sometimes here for dinner, sometimes not. They eat a lot – they’re men. So some dinners are totally eaten on the night, while others have leftovers that get packaged into smaller lunches for people the next day.

But I like to calculate how much it costs me per meal, obviously with the shredded chicken portions only serving one person, while the diced chicken and soup stock could be serving as few as 3 people or as many as 5. So let’s just count each meal portion as 1, with each soup stock counting as 3 meals.

9 X shredded chicken + 6 X diced chicken + 6 X soup stock + 1 X Chicken Tikka Masala = 22 meals’ worth of protein.  Plus the 4 meals we had from the Costco chooks before I made stock from them = 26 meals overall. (I won’t count the dogs’ dinner of chicken skins tonight! Let’s call that a bonus.)

$48/26 = $1.85 per meal of protein. If I was able to estimate how much it would be per person then the costs would go down even further, because the dinners and Costco chicken meals are covering multiple servings that I haven’t accounted for. I’m pretty happy with that.

I think that the 2 hours or so that I spent in the kitchen today was certainly time well spent. By the time term starts in another week I’ll have my freezers and pantry prepped and ready, so that Future Frogdancer won’t be driven to get takeaway meals when she feels tired at the end of a long week.

This makes me feel all Laura Ingalls Wilder – my family is being looked after and I’m ready for the zombie apocalypse, should it occur.